This is the latest installment in the ongoing General Conference Odyssey project. My previous posts in this series can be found here.  Posts by other bloggers writing about the October 1971 General Conference today are included at the end of this post. You can also check out the project group on Facebook.

You can read a little about the reasons why we are doing this in this recent article at Meridian Magazine.

Today we are writing about the Friday Morning Session of the October 1971 Conference. 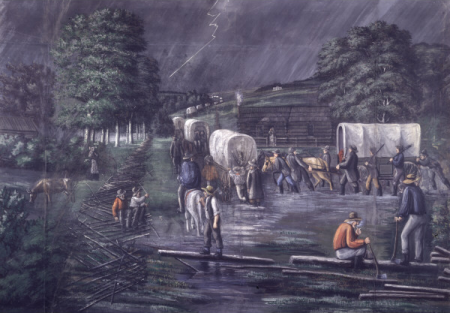 I was impressed by a talk titled “The Purpose of Life: To Be Proved” given by Elder Franklin D. Richards during the Friday Morning Session of the October 1971 General Conference.

At the time, Elder Richards was an Assistant to the Quorum of the Twelve Apostles, a position he had held since 1960. Later, in 1976 when the First Quorum of the Seventy was organized, he was called as a member of its presidency. His grandfather of the same name was an apostle of the church from 1849 to 1899.

Elder Richards was responsible for introducing a six-part missionary teaching program that was eventually used throughout the whole church. 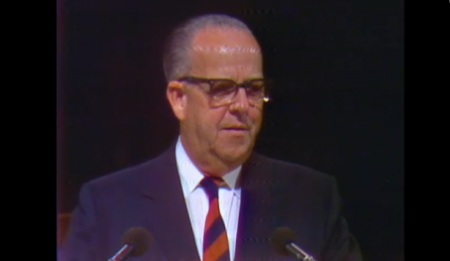 In his talk, Elder Richards talks about a very famous series of events from the early history of the restored church known as “Zions Camp.” He reviewed, in brief, the history:

“The members of the Church in Missouri were being persecuted, and the Prophet Joseph made it a matter of prayer and received a revelation on February 24, 1834. The Lord instructed the Prophet to assemble at least one hundred young and middle-aged men and to go to the land of Zion, or Missouri.

Zion’s Camp, a group of approximately one hundred and fifty men, gathered at Kirtland, Ohio, in the spring of 1834 and marched to western Missouri. By the time they reached Missouri, the camp had increased to approximately two hundred men.

The purpose of the trek was to join the Saints in Missouri and buy lands in Jackson County and surrounding counties and retrieve those lands taken by the mobs who had dispossessed the Missouri Saints of considerable of their property.

Upon reaching Missouri, and after extensive negotiations with Governor Dunklin failed to produce results, it was felt advisable to disband Zion’s Camp and await some future opportunity for the redemption of Zion.”

This brief retelling doesn’t really capture the degree of misery and difficulty these men experienced. They ranged in age between sixteen and seventy-nine years old. Many left wives and children with little or no income. They marched 1000 miles, sometimes 35 miles per day. They sometimes only had food that had gone rancid or rotten. There were quarrels and personality conflicts. They were constantly wary of enemies and threats from those who hated Mormons. They were afflicted with serious illness. God rebuked them and worked miracles for them.

Elder Richards adds: “The ‘journey of Zion’s Camp’ was regarded by many as an unprofitable and unsuccessful episode.”

In reaction to their failure, some apostatized from the church and turned against the Prophet Joseph.

Elder Richards repeats an exchange between a man in Kirtland and Brigham Young in the aftermath, as told by B.H. Roberts:

“A brother in Kirtland who did not go with the camp, meeting Brigham Young upon his return, said to him, ‘Well, what did you gain on this useless journey to Missouri with Joseph Smith?’ ‘All we went for,’ replied Brigham Young. ‘I would not exchange the experience I gained in that expedition for all the wealth of Geauga County.’ ”

What is failure? My own father related to me an experience he had in the church in which he was called and given an assignment. He planned, worked hard, and did everything he could to fulfill the assignment he had been given, but in the end it didn’t work the way he had planned. He thought he had failed. But eventually the Lord gave him a different perspective: we don’t get to define what success looks like; God defines success.

In other words, often we assume we understand the reason God asks certain things of us, or directs us to do certain things, and then if our assumed results do not come to pass, we think that we have failed. But that is because we tend to think in simple, linear vectors between cause and effect. But God deals in more complex, multi-variable, non-linear, long-term thinking. Unless we understand completely what He wanted to accomplish through the actions He has asked for (and there may be multiple), we cannot even evaluate whether or not the actions accomplished their intended purpose.

This reminds me of an experience I had with a career counseling assessment test that I took in college. The test seemed obvious to me. It asked me to rate how much I thought I would enjoy each of a list of activities, like “washing test tubes” or “writing a proposal” and based on my answers it would suggest potential careers that I might enjoy.

I thought it was silly. I assumed that if I rated “wash test tubes” high and other similar activities that the assessment would suggest that I consider working as a lab technician.

But I found out later that I was wrong. The test was more complicated than that. What I didn’t know is that they had given the same test to numerous people in various careers who had indicated that they enjoyed their jobs. They weren’t drawing a simple line between my answer and the career with which it appeared to obviously correlate. They were correlating the answers from these different professionals with mine. If we answered similarly, then the test would suggest that I might enjoy the same kind of job they did.

So if a lab technician loved her job, but hated the part where she had to wash test tubes, and I rated washing test tubes negatively, that might actually lead to the suggestion that I consider a job working in a lab, because my answers were similar to hers. (I am sure I am oversimplify how it works even now.)

Returning to Elder Richards and Zion’s Camp, he explains:

“There were hardships and disappointments, but these experiences had real value because from this group many became the leaders in the exodus of 12,000 people from Missouri to Nauvoo, and then later many became leaders in the great western exodus from Nauvoo to the Salt Lake Valley.

In February 1835 those brethren who had accompanied the Prophet Joseph to Missouri as members of Zion’s Camp were called together, and from their numbers the Quorum of the Twelve and the Seventies were chosen. The Prophet explained that the trials and tribulations endured by the members of Zion’s Camp were not in vain, and it was the will of God ‘that those who went to Zion, with a determination to lay down their lives, if necessary, should be ordained to the ministry, and go forth to prune the vineyard for the last time.’

In the light of these events it is evident that the Zion’s Camp experiences were of immense value to both the individuals involved and the Church.”

What appeared to be failure was a spiritual success for the Lord in cultivating the kind of faith and leadership that He needed for the church. To repeat what my father taught me: we don’t get to define what success looks like; God defines success.

“One of the darkest periods in the history of the Church was the winter of 1838–39. The Saints had been persecuted, robbed, and murdered. The Prophet and his associates had been betrayed and were imprisoned in Liberty Jail. Dissension and apostasy were rampant, and the Church appeared to be faced with disintegration and ruin.”

As Joseph sat imprisoned and freezing, he poured out his afflictions in prayer to God, writing:

“O God, where art thou? And where is the pavilion that covereth thy hiding place? How long shall thy hand be stayed, and thine eye, yea thy pure eye, behold from the eternal heavens the wrongs of thy people and of thy servants, and thine ear be penetrated with their cries? Yea, O Lord, how long shall they suffer these wrongs and unlawful oppressions, before thine heart shall be softened toward them, and thy bowels be moved with compassion toward them?”

And in response God gave Joseph Smith some of the most powerful, and often quoted revelations he ever received, contained now in the Book of Doctrine and Covenants, Sections 121, 122, and 123.

“The eyes of the saints were turned to it (Liberty Jail) as the place whence would come encouragement, counsel—the word of the Lord. It was more temple than prison, so long as the Prophet was there. It was a place of meditation and prayer. A temple, first of all, is a place of prayer; and prayer is communion with God. It is the ‘infinite in man seeking the infinite in God.’ Where they find each other, there is holy sanctuary—a temple. Joseph Smith sought God in this rude prison, and found him.”

This idea, that even a prison can be a temple echoes the sentiments I expressed in a previous post in this series: LDS Conference April 1971 – Profound Spiritual Experiences in an Elevator . The profoundly spiritual can be found in the mundane, and temples can be made out of prisons, if the Spirit of the Lord is there.

It is out of our trials and tribulations that God brings about his work and raises up his most valiant followers.

These teachings have direct application to the controversies of today. Some members of the church look at efforts to preserve conjugal marriage in the face of cultural redefinition, like Proposition 8, and see failure. Some like to look at policies or actions of the church and emphasize how much those actions seem to damage the church’s reputation, hurt its missionary effort, and drive away members, or are bad for PR, and they declare, “the church is doing it wrong.” It is popular to talk about all of the “serious mistakes” the prophets and apostles have made.

Those who choose to evaluate the church by the worlds standards of success in this way are no different than those who criticized Zion’s Camp as a failure. But unless they know God’s purpose in doing these things, they are in no position to evaluate whether or not they were a success or mistakes in His evaluation.

After all, from the World’s perspective, Jesus of Nazareth was a failure. The majority of his followers abandoned him when His doctrines did not please them. He was tortured and put to death as a criminal. His remaining disciples were scattered and eventually killed. And yet what they thought was His failure was in reality the winning move in the ultimate triumph over death and hell.

What appears to be failure, can be a spiritual success for the Lord. If we submit in faith and follow His directions and sustain His authorized representatives, He will accomplish greater things than we could have ever devised for ourselves.

Other posts today from bloggers writing about the Friday Morning Session of the October 1971 General Conference of the LDS Church:

One Response to LDS Conference October 1971 – What is Failure? Zion’s Camp and Liberty Jail