This is today’s entry in our ongoing General Conference Odyssey project. My previous posts in this series can be found here.  You can also check out the project group on Facebook. You can read a little about the reasons why we are doing this in this recent article at Meridian Magazine.

Posts by other bloggers writing about the October 1971 General Conference today are included at the end of this post.

Today we are writing about the Friday Afternoon Session of the October 1971 Conference. 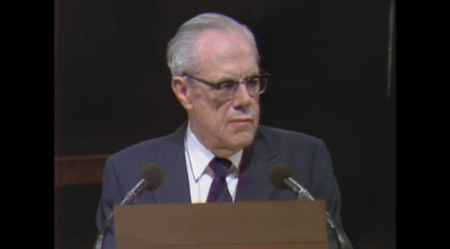 Elder Richard L. Evans was a member of the Quorum of the Twelve Apostles from 1952 until 1971. He was well known as the announcer for the weekly radio broadcast of the Mormon Tabernacle Choir’s Music and the Spoken Word program from its creation in 1929 until his death in 1971. He also narrated many of the church’s other media productions.

His October 1971 sermon titled “Should the Commandments Be Rewritten?” was the last conference talk he gave before his death about a month later, on November 1, at the young age of 65.

I found this final sermon to be powerful and memorable.  In it he admonishes those who try to find ways to justify disobeying the commandments:

“We all make choices every day. We all have to live with the results of the choices we make.

It’s just that plain. It isn’t a question of quibbling or hairsplitting or arguing about the mysteries or brooding about the things God hasn’t yet told us, while neglecting the things he has told us. Let’s stop quarreling with the commandments and the requirements and just face the facts.

Who knows better than the Creator and Father of us all what is and isn’t essential?”

This is a valuable reminder for today. Sometimes we are tempted to focus on speculative doctrines and ideas and concern ourselves with all of the things that God has not yet revealed. Meanwhile, there are a lot of things that God has revealed that we manage to neglect or dismiss. For some, speculating about mysteries and unknowns may be a lot more fun, and for others it may be a source of anxiety and doubt, but if we are really interested in getting revelation from God, we have to get down to the serious business of being righteous and complying with what He has already asked of us.

Elder Evans also made an interesting observation about where we place our trust:

“Brilliant men, philosophers and others, have wrestled with these questions through the centuries, and haven’t arrived at any answers they can agree on among themselves.

I have a great respect for scholarship, for education and research, for academic excellence, and for the magnificent accomplishments of sincere and searching men. But I also have great respect for the word of God, and his prophets, and life’s purpose; and it comes to a question of where to place our trust.

I have been privileged to know some of the ablest men on earth—men of many faiths, many professions, many accomplishments, in nearly 150 countries. But I’ve never known a man who knew enough that I was willing to trust him with my everlasting life.”

Elder Evans then returns to this this problem of quibbling and looking for exceptions and justifications:

“Sometimes people quibble about the meaning of scripture and rationalize and justify themselves in doing things they well know they shouldn’t do. They sometimes say, for example, that ‘Thou shalt not commit adultery’ doesn’t include all the other kinds and degrees of immoral sins and perversions, or that the Word of Wisdom, for example, doesn’t catalogue all the substances and brand names and all the products and dope and harmful things that have been discovered or concocted that are not good for men.

The Lord expects us to use wisdom and common sense and not quibble about what obviously isn’t good for the body or mind or spirit or morals of man.”

I have written before about this kind of “technicality-game.” It is sometimes used by bright children, rebellious teens, lawyers, politicians, murmuring bloggers, and– well, really just about everyone. We conveniently slide between ambiguity and an absurd degree of literalness to achieve a technical win. I have fallen into this trap in disagreements with family before. It is easy to overlook those things that might contradict what we want or think and to over-emphasize those things that can be construed as supportive. Or we may demand an unwarranted degree of specificity and excuse ourselves because it is not there. Or we focus on exceptions until there is no rule.

But we aren’t really fooling anyone. Least of all God.

Elder Evans warns against those who undermine ideals with these kinds of quibbles:

“Don’t follow anyone who will endeavor to destroy ideals, reject the commandments, or lead you to lower levels.

Anyone is mistaken if what he is doing would lead him down physically, mentally, or morally, if it would destroy his peace, or estrange him from his Father in heaven, or impair his everlasting life.

And if you’ve turned toward some dead-end or down some wrong road, turn back as quickly as you can—not later than right now—and thank God for the principle of repentance.

Don’t run aimlessly looking to and fro for what has already been found.”

The measure for what is right that Elder Evans teaches is quite demanding: we must reject not only those things that tear us down physically, mentally, or morally, but also anything that would would estrange us from God, the peace of His Spirit, or impede us from achieving everlasting life. In a world that tends to measure what is “good” in terms of physical and emotional pleasure, this is an offensive-smelling doctrinal elixir.

Toward the end of his talk, Elder Evans re-asks his titular question: “Should the commandments be rewritten?”

And he answers it with the same answer with which he opened: “No, they should be reread and become the guide and standard of our lives, if we want health and happiness and peace and self-respect.”

Other posts today from bloggers writing about the Friday Afternoon Session of the October 1971 General Conference of the LDS Church: