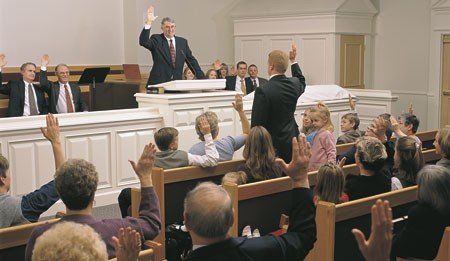 To sustain is to make the action binding on ourselves and to commit ourselves to support those people whom we have sustained. When a person goes through the sacred act of raising his arm to the square, he should remember, with soberness, that which he has done and commence to act in harmony with his sustaining vote both in public and in private.“

Sustaining in the church happens so regularly that, for me at least, it can come to feel rather routine and mundane. It does seem to carry more gravity during conferences when we are asked to sustain the president of the church, his counselors, and the twelve apostles as “prophets, seers, and revelators.” But in the regular shuffle of responsibilities and assignments in our congregations, it doesn’t often carry the weight of a “sacred act” which is remembered “with soberness” as Elder Dunn suggests.

It is easy to fall into a perfunctory hand raised merely in non-objection. But non-objection is not what is being asked of us.

Raising our arm to the square to sustain a calling should be an expression of faith– not necessarily faith in the person who was called, but in the authority of those who made the call, and in God who inspires and directs them through the Holy Spirit regarding who should be called. In other words, a sustaining vote is an acknowledgement of the reality of priesthood authority and of revelation. And that really should be a sacred and sober act, whether it is for the prophet, or for someone to play the piano for children in Sunday School.

What about dissenting votes? If sustaining is not like democratic voting then what is the purpose of asking for any opposed?

The current Handbook 2 for the church gives the following direction concerning dissenting votes:

“If a member in good standing gives a dissenting vote when someone is presented to be sustained, the presiding officer or another assigned priesthood officer confers with the dissenting member in private after the meeting. The officer determines whether the dissenting vote was based on knowledge that the person who was presented is guilty of conduct that should disqualify him or her from serving in the position.”

“If for any reason we have a difficult time sustaining those in office, then we are to go to our local priesthood leaders and discuss the issue with them and seek their help.”

Throughout the history of the church, as people have joined they have brought with them ideas and practices from their previous churches or from the cultures and societies they come from. Some of these ideas are compatible and consistent with the restored gospel. But others are foreign and incompatible, and when they are imported into the church they can cause confusion and apostasy.

In our modern, egalitarian societies it is easy to import democratic notions into the church.

Elder Dunn explains that because the church is not democratic, the accountability of the leaders is not to the members. He quotes President Brigham Young who explained:

And he extends this principle down to the Bishop of an individual congregation who is therefore “not answerable to the members of his ward, but instead is answerable to the Lord and to those priesthood leaders who preside over him.”

Democratic ideas in secular government are generally good and compatible with the gospel in that context, but that is not the way that God has decided to organize and govern his church. So in the context of church government democratic notions can be incompatible and inappropriate. In societies where democratic principles are considered an unqualified good, the fact that the church is not a democracy and that its leaders are not accountable to the members can be difficult for some people. That is why it is essential to gain a testimony of the priesthood authority of the leaders of the church, and that God does lead the church through revelation.

It is interesting that Elder Dunn mentions that by raising our hand to sustain the calling of someone else, we are committing ourselves to act in harmony with that acknowledgment “both in public and in private.” That suggests that our sustaining vote not only binds us to public support, but also to not privately oppose or undermine them. He knows that “there are many in the Church who may not be as attentive to their duties as they might be,” but he reminds us that the fact that they may fall short of their duties does not mean that they haven’t been called of God by revelation. We avoid not only public, but private opposition and undermining, even if an individual falls short, because they were called through revelation, by God who is well aware of their shortcomings.

Elder Dunn suggests that, on the flip side, those who fall short in their calling need to receive reassurance and confirmation that their calling does come through the inspiration of the Holy Spirit:

“A calling in the Church is both a personal and a sacred matter, and everyone is entitled to know he or she has been called to act in the name of God in that particular position. Every person in this church has the right to know that he has been called of God. If he does not have that assurance, then I would suggest he give his calling serious, prayerful consideration so that he can receive what he has a right to receive.” 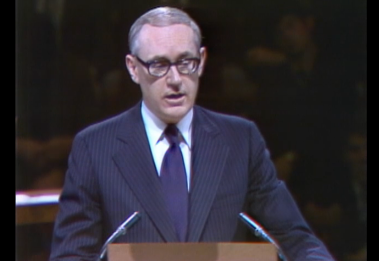 I am thankful to have read the words of Elder Dunn from so many years ago. I do know that God guides his church through revelation, both to his living prophets and apostles, as well as to local leaders. I sustain their authority and know that they are accountable to God. I feel a desire to not simply give a vote of non-opposition, but to sustain the callings of my ward members and neighbors with greater solemnity and commitment.

Other bloggers writing today about the Thursday Morning Session of the April 1972 General Conference of the Church of Jesus Christ of Later-day Saints: