Opposition Votes in LDS General Conference – The Vote Has Been Noted 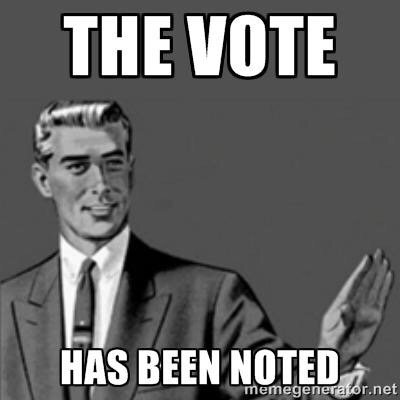 Apparently the opposition votes you heard in LDS General Conference were by only 5 only 7 individuals, but they managed to yell loud enough to be heard in the broadcast. This was part of an organized effort by a group coordinating via the internet to secure tickets to the conference specifically to express opposition.

In the group’s written statements they express their belief that the apostles are insulated from the kinds of concerns and criticisms these people have. So one of the goals of this organized effort seems to have been to get an audience with an apostle. In past decades those voting in opposition were directed to meet with an apostle or other general authority. It must have been quite a blow when President Uchtdorf directed them to meet with their stake presidents and not a general authority, which is the procedure they were trying to circumvent in the first place.

My suggestion is that as members we not be too harsh on these dissenting members. They are misguided and faithless, but they are still our brothers and sisters and hopefully they can be brought back to believe that the church is truly guided by Jesus through his living prophets. They exercised their right to dissent and their vote was noted.

Enjoy the rest of conference!