In Defense of Elder Bruce R. McConkie – A True Apostle of Jesus Christ 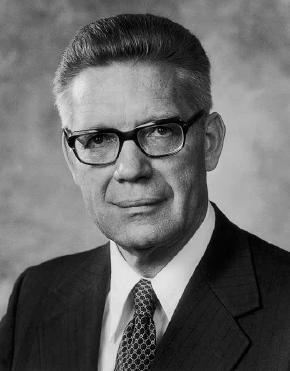 There is no denying the considerable influence of Elder Bruce R. McConkie upon the Church of Jesus Christ of Latter-day Saints and upon Mormon culture. Elder McConkie was a member of the Quorum of the Twelve Apostles from October 1972 until his death in April of 1985.

Prior to becoming an apostle, he published Mormon Doctrine, a book of commentary on the gospel and the church presented in the style of an encyclopedia, comprised of his own, unofficial doctrinal analysis and explanations. The book was a cultural phenomenon for decades to come. But the leadership of the church at the time was not entirely happy with the book’s success, since it represented personal interpretations that were not the official teachings of the church. He was asked to revise his tone and make many, many changes in the second edition. Deseret Book discontinued publication of Mormon Doctrine in 2010.

Over the decades, Elder McConkie has become a favorite subject of derision by liberal and dissident members of the church. It makes me very sad to see bloggers and internet commenters regularly refer flippantly and dismissively to Elder McConkie. Despite some real human weakness, he was a remarkable man, a powerful teacher, and a true apostle of Jesus Christ. There is much we can learn from him and he deserves greater respect and consideration.

Much of the disdain revolves around Elder McConkie’s views and writings defending the church’s policy of withholding the priesthood from members of African descent prior to the 1978 revelation that ended the restriction. In the mind of some, he plays the role of the ignorant, prejudiced bogeyman in opposition to the enlightened, liberal, agitating intellectuals. And the way the story is often represented, Elder McConkie was only finally repudiated when President Spencer W. Kimball received the revelation rescinding the priesthood ban, forcing Elder McConkie to recant (which to his credit he did).

But Elder McConkie’s involvement in what culminated in the revelation lifting the restriction is far more complex than such oversimplified stories allow.

Edward L. Kimball’s fantastic, comprehensive account of the history of the reception of the 1978 revelation that lifted the priesthood ban (PDF) includes some important tidbits about Elder Bruce R. McConkie that appear to have been widely overlooked.

Edward Kimball notes that in June of 1977, a year before the revelation was received, “Spencer invited at least three General Authorities to give him memos on the implications of the subject. Elder McConkie wrote a long memorandum concluding that there was no scriptural barrier to a change in policy that would give priesthood to black men. Considering Elder McConkie’s traditional approach to the topic during the Lee administration, this conclusion explains why, according to Elder Packer, “President Kimball spoke in public of his gratitude to Elder McConkie for some special support he received in the days leading up to the revelation on the priesthood.” Although minutes of quorum meetings are not available and participants have not commented in detail, the First Presidency and Quorum of the Twelve discussed the issue repeatedly, at length, and over a period of months.” (p. 46 – 47)

Then, about a year later, on June 1, 1978, the day the revelation was received, but before its reception, President Kimball asked ten of the twelve to stay with him after their normal worship meetings (two were absent). He asked them to skip lunch and fast with him as he sought a clear answer from the Lord on the issue.

He explained to them his thoughts and feelings, and then “he asked the Twelve to speak, without concern for seniority. […] Elder McConkie spoke in favor of the change, noting there was no scriptural impediment. President Tanner asked searching questions as Elder McConkie spoke. Then Elder Packer spoke at length, explaining his view that every worthy man should be allowed to hold the priesthood. He quoted scriptures in support of the change. Eight of the ten volunteered their views, all favorable. President Kimball called on the other two, and they also spoke in favor. Discussion continued for two hours.” (p. 55 – 56)

Then they joined together in prayer to ask for confirmation and received a glorious response from the Lord. The full account is powerful and I encourage you to read it (PDF). The focus here, however, is on Elder McConkie.

After their miraculous experience, but before they adjourned, President Kimball asked Elders Packer, McConkie, and Hinckley to each write a proposal for how to announce the change. (p. 59)

Seven days later, a draft announcement was constructed from the three proposals, which was then revised by the First Presidency. Then, on June 8th, the announcement was reviewed by the council of the twelve apostles, who also made some slight alterations. Edward Kimball relates that then “they discussed timing. Some thought it best to wait for October general conference. Others suggested making the announcement at the mission presidents’ seminar the next week. But Elder McConkie urged immediate release: ‘It will leak, and we have to beat Satan. He’ll do something between now and then to make it appear that we’re being forced into it.’ ” (p. 60)

The next morning, June 9th, all available General Authorities were called to meet in the temple. President Kimball spoke about the matter. Then the written announcement was read out loud and they solicited comments from the general authorities present. According to Edward Kimball’s account, in response to the solicitation for comments, “the Apostles led the way. Elder McConkie, among the first to speak, gave an impassioned extemporaneous lecture on the relevant scriptures.” (p. 64)

After the decision was unanimously approved by sustaining vote of the General Authorities, the Public Communications department was instructed to immediately make the decision public.

As you can see, the idea that Elder McConkie was some kind of stubborn holdout until the very end when he was grudgingly corrected by prophetic revelation is simply not true. Yes, he had written previously that the restriction would not be lifted until the millennium. And he had advocated theories for why the restriction existed that turned out to be incorrect– some of which he continued to believe even after the revelation.

But let’s review the additional facts from the excerpts above:

In August later that same year, in an address on the topic given at a Church Education System symposium entitled All Are alike Unto God (PDF), Elder McConkie declared:

“There are statements in our literature by the early brethren which we have interpreted to mean that the Negroes would not receive the priesthood in mortality. I have said the same things, and people write me letters and say, “You said such and such, and how is it now that we do such and such?” And all I can say to that is that it is time disbelieving people repented and got in line and believed in a living, modern prophet. Forget everything that I have said, or what President Brigham Young or President George Q. Cannon or whomsoever has said in days past that is contrary to the present revelation. We spoke with a limited understanding and without the light and knowledge that now has come into the world.

We get our truth and our light line upon line and precept upon precept. We have now had added a new flood of intelligence and light on this particular subject, and it erases all the darkness and all the views and all the thoughts of the past. They don’t matter any more.

It doesn’t make a particle of difference what anybody ever said about the Negro matter before the first day of June of this year (1978). It is a new day and a new arrangement, and the Lord has now given the revelation that sheds light out into the world on this subject. As to any slivers of light or any particles of darkness of the past, we forget about them.”

Elder McConkie’s willingness to publicly recant personal beliefs for which he was well-known is an example of integrity and humility that we would all do well to emulate. He truly believed in prophets and revelation.

Those who marginalize and demonize Elder McConkie, or any of the other faithful apostles of the church, exhibit a childishness and faithlessness that is unbecoming. We can be mature enough to recognize human weakness and error in individuals, while still respecting and honoring them as true prophets and apostles and while continuing to be confident that the Lord guides His church through their unanimous voice. That doesn’t mean we have to agree with every idea or opinion put forth by them individually, but we ought to approach their teachings with requisite soberness and deference. The Lord called them, knowing their individual strengths and weaknesses. Faithful members of the church are rightfully wary of those who undermine the living prophets and apostles by being publicly dismissive and disrespectful.

Those who mock and dismiss Elder McConkie deprive themselves of the great opportunity to learn many good and great things from an Apostle of Jesus Christ.

7 Responses to In Defense of Elder Bruce R. McConkie – A True Apostle of Jesus Christ