I’ve been getting ready to study the Book of Mormon for Sunday school in 2012. I wanted to create a way to more easily place the first three prophets of the Book of Mormon (Lehi, Nephi, and Jacob) into context related to the prophetic books, and some historical writings like Ezra, of the Old Testament. After some research and experimentation with layout, I put together this timeline of Old Testament and Book of Mormon prophets between 800 B.C. and 400 B.C. 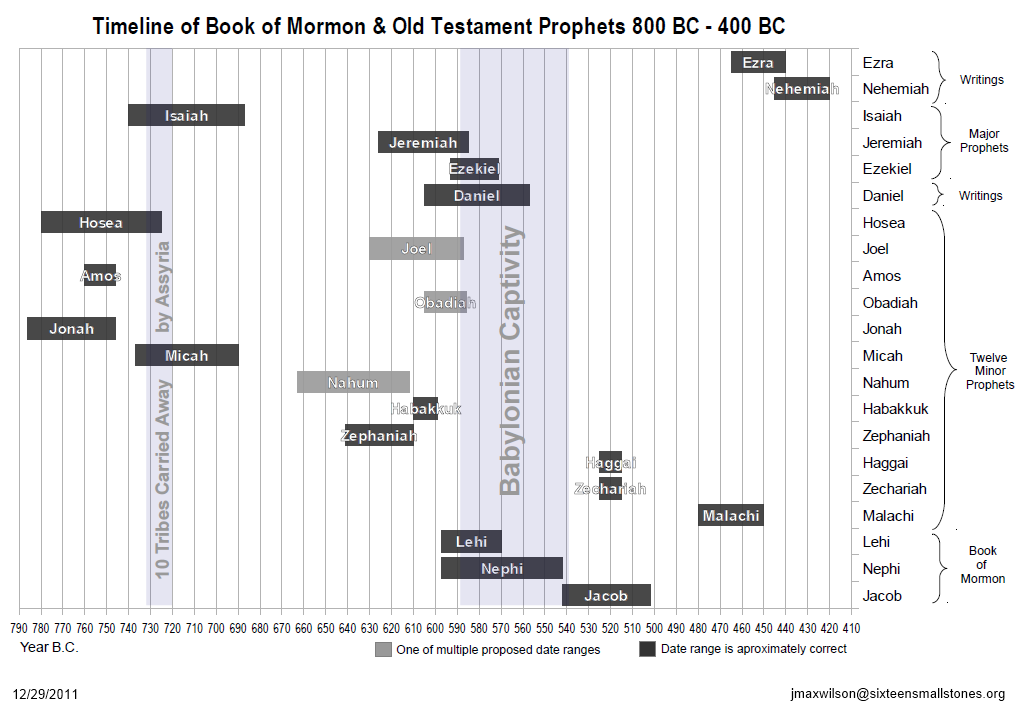 For the best view, and especially for printing, I recommend downloading it as a PDF document:

The timeline has a few flaws.

For one, I am certainly not a graphic designer. I created it using LibreOffice Calc so that I could update the date ranges easily without having to re-create the graphic from scratch.

For another, the correct date ranges for some of the prophets are notoriously difficult to pin down. I’ve placed the prophets according to the best information my research could find and I’ve included a little margin of error in the date ranges. The more ancient prophets are especially fuzzy, so the ranges tend to indicate a longer period in which they may have been operating. For those prophets for whom there are multiple proposed dates with little consensus, like Joel, I have selected the date ranges that made the most sense to me based on the information I had, but marked them with a lighter background to indicate that there are other possible placements.

I am also aware that scholars believe that books like Jonah and Daniel may have been written after the Babylonian captivity and that others may have been written over a period of time by multiple authors under the same name. However, I have opted to place the prophets in the time when the events of these books are set or when the prophet to whom the writings are attributed likely lived.

Along the right side the prophets are listed in the order they appear in books of the Old Testament and Book of Mormon to make it easy to correlate the book order to the timeline. It also identifies which group of Hebrew and Christian scriptures the book comes from (Major Prophets, Minor Prophets, The Writings) and the Book of Mormon.

I hope it will be as helpful to others as you study the Book of Mormon and Old Testament as it has been to me.