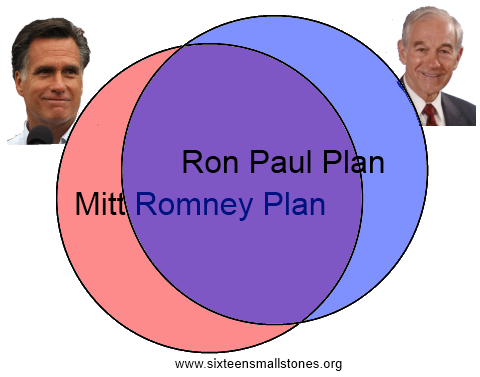 In the contest to be the Republican party candidate for President of the United States, the standard narrative characterizes Mitt Romney as a moderate, without solid conservative principles to inform his decisions, who has the support of the party establishment. At the other end of the spectrum, Ron Paul is characterized as as a conservative-zealot, a party outsider whose system of libertarian principles trump all practicality and compromise.

Because of this contrast, more than a few Paul supporters have demonized Romney as the functional equivalent of President Barack Obama, and many indicate that if Romney becomes the Republican candidate they will vote for a third party candidate or refuse to vote altogether. Quite a few Romney supporters, on the other hand, demonize Ron Paul as a crazy, conspiracy theorist whose views are simply too extreme to take seriously.

What most people don’t seem to realize is that, ideological differences aside, if you compare the details of what Ron Paul and Mitt Romney say they plan to actually do as President they are much more similar than the characterizations would lead you to think.

As you can see, 70% of the individual measures that Paul and Romney are proposing are the same or very similar. The 70% in which they match consist of practical measures that can be implemented to shrink the size of government and improve the economy.

The 30% of measures which Paul proposes that Romney doesn’t consist primarily of the more drastic measures, many of which are appealing to some limited-government and libertarian conservatives. This 30% would need to be planned out in far more detail before they could be realistically implemented. Things like abolishing all foreign aid and eliminating whole federal agencies require practical phase-out transitional planning to win wider support, as well as cooperation from a congress that is sure to resist drastic changes.

Politics in the U.S. is all about coalition building. Ron Paul knows that his chances of becoming the Republican nominee are slim. But he’s playing the game to get as many delegates to the convention as he can so that his libertarian views will be assured a more influential place within the Republican coalition.

Romney would deliver most of the more practical measures that Paul supporters would get from a Ron Paul presidency and by sticking in the party, Paul guarantees that the Republicans will make concessions to appeal to his sizable faction. That means that a Romney Presidency would be smart to include Paul in some fashion. He might even get to audit the Fed and move the TSA closer to extinction.

I suspect that Ron Paul knows that he will accomplish a lot more in this way then he could by drawing away his supporters as a 3rd party candidate.

Unfortunately, some of Paul’s supporters don’t seem to be as wise as Ron Paul himself. They are so uncompromising that they are willing to sacrifice the chance to get 70% of what Paul would do and the chance to have their views wield more influence in the Republican party because they will refuse to vote for Romney if he is the nominee. And if that inflexibility results in four more years of a Democratic party controlled White House, that would be a tragic mistake.

Intraparty political contests are all about focusing on difference and ideology. Candidates need to distinguish themselves from their opponents in order to compete and attract supporters. But it is also valuable to counterbalance the difference with a realistic look at similarities. If we neglect the comparable and complementary and only look at the contrast we risk a distorted, unbalanced perception.

So vote for Ron Paul in the primary elections if you believe he is the best candidate, or if you want to see his positions have more influence.  But don’t refuse to vote for Romney, who may likely be the nominee, because he isn’t Ron Paul.  And if you are a Mitt Romney supporter, don’t demonize Ron Paul supporters.  They hope to accomplish many of the same things, and they make a positive contribution to supporting limited, constitutional government.