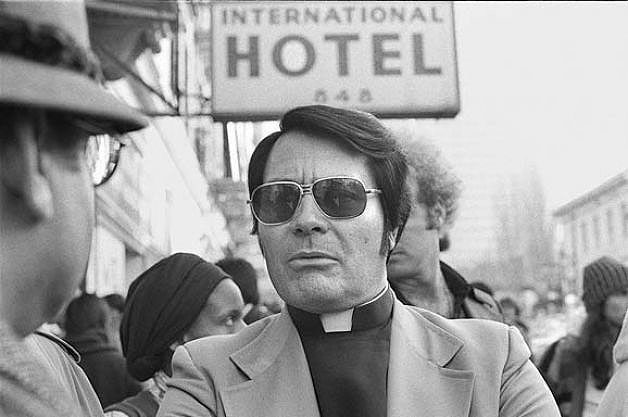 In modern Internet culture, references to “drinking the Kool-Aid” have become a rather common idiomatic expression to derogatorily describe anyone whose dedication to a cause or ideology is complete and unquestioning.

Most people know that this is a reference to the terrible 1978 mass-murder/suicide of over 900 American expatriates in Jonestown Guyana, including 276 children. Under the influence of “Reverend” Jim Jones, whom they had followed from California to Guyana, they ingested a Kool-Aid style drink laced with sedatives and lethal amounts of cyanide.

Jones was the founder of a movement known as The People’s Temple. Many people who use the reference simply assume that Jones and his group were some kind of right-wing fundamentalist Christian cult (after all he is referred to as “Reverend Jim Jones”). We have been conditioned by our news and entertainment media to think of cults only in terms of conservative, conspiracy-theory-prone, fundamentalist Christians. Cults are supposed to be “irrational” and so Hollywood assumes they must be right-wing Christian religionists, which they wrongly assume are irrational, and most people just accept that assumption uncritically. In the movies a left-wing, atheist, Marxist cult is more elusive than Big Foot.

But reality is far more interesting: Contrary to suppositions, The People’s Temple was in fact a deadly left-wing, atheist, Marxist cult and Jonestown was a Socialist commune.

Jim Jones was a dedicated communist from the outset. While he initially founded his group as a a liberal offshoot of the Methodist denomination, in his own biographical record he admitted that he did not really believe in religion, he saw it as a tool to disingenuously use to further his Marxist goals. By 1976 he was open about his atheism while still styling himself as a “reverend” and his organization as a “church”. In 1977 his wife explained to the New York Times that “Jim used religion to try to get some people out of the opiate of religion.”

The fact is that, until the group ran away to Guyana, The People’s Temple was, in many regards, a model for how Liberals think rational religion ought to be.

In the 1950s’, Jones broke with Methodists because he wanted integrated black and white congregations and the Methodists with which he was associated wanted continued segregation. Later, as his following grew, Jones assigned the highest leadership roles in the organization to young, college-educated women who self identified as socialists, communists, and pacifists.

He regularly cast doubt upon the Bible, preferring to discard most of it as an oppressive “paper idol” used by white men to oppress blacks and women, while extolling a more metaphorical scriptural reading in line with Marxism, where God was a Divine Principle of “Love” and Love was equal to Socialism. He characterized Jesus as a communist revolutionary.

The “church” considered capitalism “the Antichrist system” and favored a Social Gospel of action.  They gained a reputation for helping the poor, homeless, addicts, and racial minorities. They ran soup kitchens and homes for the elderly, foster children, and the disabled. Most of the rank and file members of the group were poor minorities and the People’s Temple cultivated strong ties with the California state welfare system.

By the mid 70s’ the “church” was overtly political and openly atheist and socialist. Jones established a network of support from well known Democratic politicians who were sympathetic to his leftist movement, including California Governor Jerry Brown and Lt. Governor Mervyn Dymally, San Francisco Mayor George Moscone, Assemblymen Willie Brown and Art Agnos, and activist Harvey Milk. Moscone even appointed Jim Jones Chairman of the San Francisco Housing Authority Commission in 1975, only three years before the tragedy.

Milk and Moscone continued to support and defend him only months before the Jonestown suicide, even after investigations into The People’s Temple began and Jones and his followers left for Guyana .

One member of the group explained that the reason they chose to establish a commune in Guyana was that “corporations, or the multinationals, were getting much larger, their influence was growing within the government, and the United States is a racist place” (Language that sounds surprisingly familiar in our modern occupy-wall-street era).  He also said that Guyana was selected because it was an English-speaking country with a Socialist government.

After settling in Jonestown, Jones and his followers met frequently with representatives of the Soviet Union, North Korea, and Cuba, looking for other potential locations to which to immigrate only weeks before the final mass murder.

Several of his followers left notes before their suicides, with additional signatures from witnesses, lamenting a world that was not ready for communism and bequeathing their money to the communist party in the U.S.S.R. Then they drank the Kool-aid.

Wikipedia has extensive information on Jim Jones, The People’s Temple, and the tragedy at Jonestown. It is worth your time to learn about it.

I have written previously about G.K. Chesterton’s idea that madness is not the loss of Reason, but the loss of everything but Reason. (See: Apostasy as Conspiracy Theory: Reason, Logic, Insanity and Mormon Intellectualism)

There are those who advocate a liberal approach to religion. They reject much of the scriptures and religious tradition because they consider them “sexist”, “racist”, and “homophobic”. They seek principles of Social Justice in scriptures which they consider “inspired fiction.” They see Socialism in the Gospels and the teachings of Jesus, while disbelieving in a literal Resurrection. They see God and Satan as metaphors, not real beings. They want to see their churches become vehicles for social change and helping the poor and down trodden while rejecting authority and tradition; dogma taking a back seat to action. They see themselves as rational, enlightened intellectuals with a passion for justice and helping the downtrodden and an aspiration for Utopia. And they are not wrong in that self estimate.

I am not saying that such people are dangerous cultists.

But it is important to recognize that atheism, intellectualism, rationalism, and enlightened progressivism will not save you from the danger of ending up in Jonestown. After all they didn’t save The People’s Temple.

Or the Communists in the Soviet Republics or Cambodia.

Some of the most horrific events in history were carried out under those same banners.

One Response to Don’t Drink the Kool-aid: Jonestown was an Atheist Marxist Socialist Cult