The Dirty Secret That Afghanistan and Hollywood Have In Common 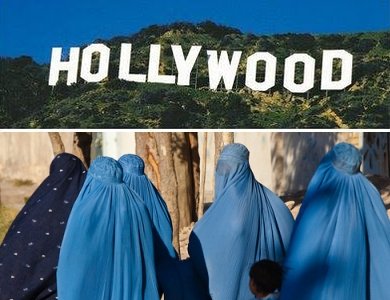 In many ways we assume that liberal Hollywood and reactionary Afghanistan are complete opposites. Hollywood gratuitously flaunts sexuality and pushes the limits of what is socially acceptable.  The Taliban and other groups in Afghanistan impose ultra-conservative religious rules of modesty and appropriate behavior. But both societies share a dirty little secret: rampant pedophilia.

Though it has received some attention in the press, most people still seem to be unaware of the pedophilia problem in Afghanistan:

“In Kandahar, population about 500,000, and other towns, dance parties are a popular, often weekly, pastime. Young boys dress up as girls, wearing makeup and bells on their feet, and dance for a dozen or more leering middle-aged men who throw money at them and then take them home. A recent State Department report called “dancing boys” a “widespread, culturally sanctioned form of male rape.”

Even though the practices are illegal in Afghanistan, they are culturally acceptable and the laws are rarely enforced.

In recent months we have found out that pedophilia is also wide-spread in Hollywood. Former child-star Corey Feldman has come forward as a victim of Hollywood pedophilia:

“I can tell you that the No. 1 problem in Hollywood was and is and always will be pedophilia. That’s the biggest problem for children in this industry… It’s the big secret.”

Feldman won’t name names at this point, but his claim is backed up by a couple of other Hollywood stars, including Alison Arngrim who was a child star on Little House on the Prairie:

“I literally heard that they were ‘passed around. The word was that they were given drugs and being used for sex. It was awful – these were kids, they weren’t 18 yet. There were all sorts of stories about everyone from their, quote, ‘set guardians’ on down that these two had been sexually abused and were totally being corrupted in every possible way.”

Hollywood condemns the sexual repression imposed by religious conservatives and in turn Muslim fundamentalists in Afghanistan decry the perversions of the sexual liberation pushed by Hollywood and the Great Satan. And yet both turn a blind eye to the gross sexual abuse of children perpetuated among their own.