“The Book of Mormon” Musical is Anti-Mormon Dreck 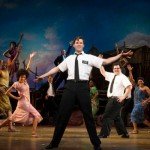 By now you’ve all heard of the The Book of Mormon Broadway Musical, created by the makers of the vulgar comedy show South Park in collaboration with one of the people behind the obscene Puppet Broadway show Avenue Q.   It’s received glowing reviews from nearly all the elites and has been nominated for 14 Tony Awards.

It’s been described as “sweet” and it’s mockery of Mormonism dismissed as a form of affectionate teasing about the goofy beliefs that Mormons have, while still recognizing their value to society. Even some so-called “Mormons” and supposedly “Active Members” of the church have lauded it and encouraged members to see it.

I’m here to tell you that these plaudits are a load of tripe.  The Book of Mormon Broadway Musical is pure garbage.  The fact that so many people, including members of the church, have given it such glowing reviews simply manifests how desensitized these people are to vulgarity and blasphemy, and how far their hearts are from God.

When brother Michael Otterson, who is the head of the public affairs department of the LDS church, wrote about why he won’t be seeing The Book of Mormon musical for the “on Faith” blog for the Washington Post, some members of the church said that he had no business criticizing it when he hadn’t seen it.

Like brother Otterson, I would never pay money to go see the show.  I don’t want to give any support to something that even it’s most adulating reviewers say is full of unbelievably obscene language, so much so that they can’t even print it in their reviews.   However, when NPR posted the entire cast recording of the show for free listening on their website, I made the mistake of letting the criticism of brother Otterson’s not having seen the show before he criticized it get the best of me.

I tried to listen to all of the songs from beginning to end.  I made it through most of them, but there were two of them that were so unbelievably offensive that I had to stop and skip on to the next song before they completed.

It’s not just the extremely offensive language.  Even disregarding the vulgarity, the only way I can think to describe the message of the music is Anti-Christ.  There is absolutely nothing uplifting, edifying, or virtuous to be gleaned. And while some of the music is catchy and happy-sounding, it is merely a colorful envelope with which the spiritual anthrax is delivered to it’s victims, the audience.  And even the musical envelope itself is pedestrian and superficial. You’ll find more musical authenticity in the boy’s band organized by Herold Hill in The Music Man or even a profanity laced emo-punk album.

The way in which the names “Heavenly Father” and “Jesus” are used throughout the music made me cringe every time they were said.  All the expressions of faith by the characters, even the supposedly faithful ones, were hollow.  The ways in which the Mormon characters refer to their relationships to God, Jesus Christ, the Church, and each other are so inauthentic and false that the audience can’t help come away from it with a complete misunderstanding of what Latter-day Saints are like and what they really believe. This was not a good-natured, affectionate jibing.  Sarcasm is by definition belittling and unfriendly. This was a sarcastic, anti-Mormon production from start to finish, performed more artfully than your typical anti-Mormon tract, but no less maliciously.

One of the most offensive songs actually had no profanity at all.  In it the missionary and a woman they have been teaching sing about baptism using terminology meant to explicitly invoke the idiom of a first sexual encounter.

From the second song onward it is clear that Elder Price has no interest in the glory of God, or bringing people to Christ.  In fact, the elders in the songs talk about bringing people to the church, but not about Christ or the Atonement at all. Price‘s primary motivation  is to leave his own mark, doing something great, and change the world– and get the credit for it.  While he does progress from wanting to do it all by himself and reap all the glory himself to the point of doing it with his companion, in the end he is willing to knowingly perpetuate false teachings in order to do it.

The missionaries in the songs progress from superficial beliefs with which the writers have conveniently endued them (as a straw-man to knock down) to a more nuanced belief. This transition culminates in the finale called “Tomorrow Is A Latter-day” which is not much more than an anti-Mormon rewrite of Annie‘s “The Sun Will Come Out Tomorrow” with a few reprises from previous songs.  In it the missionaries, who by this point have lead the Ugandans to believe that God commanded Joseph Smith to stop raping babies and that he could instead cure his AIDS by raping frogs, declare:

“We are still Latter-day Saints, all of us, even if we changed some things, or we break the rules, or we have complete doubt that God exists, we can still work all together and make this our paradise planet.”

“Who cares what happens when we’re dead, we shouldn’t think that far ahead. The only latter-day that matters is tomorrow.”

And the song ends with Ugandans reprising the opening song now as missionaries themselves, except they are now preaching the story of their “prophet, Arnold Cunningham” instead of Joseph Smith, and the Gospel of curing AIDS by raping frogs.  So Elder Price‘s desires to leave his mark are fulfilled his companion becoming a “prophet” who brings happiness to people through stories that he knows are lies.

This implied analog to Joseph Smith as a false prophet, and subtly to Jesus Christ as well, is the final message of the show.

Don’t waste your time with this dreck. Read the actual Book of Mormon instead.  It has more depth, more complexity, more honesty, and a much, much greater potential to change your life.

Latter-day Saints should distrust anyone, member or not, who praises such wicked doggerel.  And if our society rewards it with treasure and plaudits, then it just goes to show how little they have progressed since “Trapped by the Mormons” came out in 1922.