This is my latest installment to the ongoing General Conference Odyssey project. My previous posts in this series can be found here. Posts by other bloggers writing about the October 1971 General Conference today are linked at the end of this post.  You can also check out the project group on Facebook.

Today we are writing about the Saturday Afternoon Session of the October 1971 Conference. 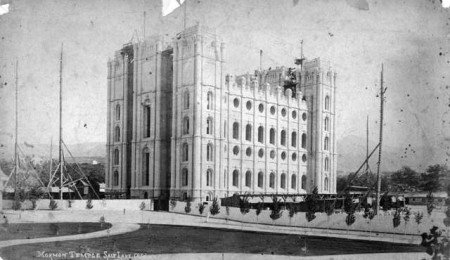 Today I want to highlight a few quotes that stood out to me from the speakers in the Saturday Afternoon Conference Session of October 1971.

In “Laying a Foundation for the Millennium,”Apostle LeGrand Richards shared a story about Brigham Young and the construction of the Salt Lake City Temple:

“When the foundation was being laid, we are told that it was sixteen feet wide, and at one time President Brigham Young came and saw the workmen throwing in chipped granite. He made them take it out and put in those great granite blocks with this explanation: ‘We are building this temple to stand through the millennium.’ Isn’t that a good thought? Each one of us ought to want to build our lives and help our families to build their lives so that we can stand through the millennium.”

Have you ever been working on a project and, when you are part way through, been told that you are doing it wrong and you have to undo what you have done and do it over? I certainly have, and it can be infuriating. I imagine that the men working on the temple might have felt a bit put out when President Young told them they were building the temple wrong and made them undo what they had done and redo it.

But if the temple was to stand until the 2nd coming of Christ and then a thousand years beyond, even what might have been considered “standard” practice or “up to code” would not be sufficient.

I like how Elder Richards encourages us to likewise build our lives and help our families build their lives “so that we can stand through the millennium.” To me that means that, just like those men working on the temple, we may at times be required to stop and undo some of what we thought we had already done and then redo it more carefully or thoroughly. Even if what we have been doing is considered acceptable by common standards, we aren’t building to the acceptable standards of society, we are being asked to build our lives to a higher standard. And at times the only way to make it durable enough to last is to back up and try again.

Dovetailing very well with this imagery, Elder James A. Cullimore, who was an Assistant to the Twelve, spoke about repentance and specifically the role of confession and forsaking sin in repentance:

“After one has been brought to realize his transgression and made his determination to turn from it, he must humble himself to make his confession. It would be much easier to simply cease doing the wrong, in the case of serious sin, and say nothing to anyone. But to humble himself to confess it to the ones offended and to the bishop is a more sobering matter and takes real humility.”

I can tell you from experience that sin is embarrassing. Confession is hard. But humility is not an optional ingredient of repentance, and confession is a token of real humility. Somehow I had never previously connected confession firmly to humility in this way.

Sometimes there is a temptation to turn repentance into a formula; a series of steps that when followed magically erase our guilt. But I know that it is possible to superficially check off all of the steps and still not be repentant. If you go through the motions of confession, but are not humble, then repentance is not complete, even if the outward accouterments of repentance are present.

The imagery from Elder Richard’s story about the construction of the temple also connects well to Bishop Victor L. Brown’s touching talk, in which he tells about men who found the restored gospel and forgiveness for their sins while incarcerated in prison:

“Men dressed in prison uniforms offered humble, sincere prayers to God, expressing gratitude for their blessings and for the knowledge they now have of his gospel. Several stood at the pulpit and testified that they know God lives, and expressed gratitude for his goodness to them.”

Again, humility is central to real repentance. The men in prison that Bishop Brown describes are not trying to excuse or minimize their serious sins. But they have learned to be humble and find hope in the atonement of Jesus and in keeping the commandments.

Elder Brown reminds us that there are other kinds of prisons and that they way out of them is the same:

“There are many who find themselves in circumstances similar to those of Jim and Ed—not necessarily confined to a correctional institution, but nevertheless in prison, a prison from which legal authorities cannot release them, a prison of personal habits such as alcohol, drugs, immorality, selfishness, dishonesty, laziness, aimlessness; yes, these can be more confining and damning than any state prison. Yet there is a way to escape to a freedom that surpasses anything designed by man– […] This freedom can only be found by accepting the divine plan and keeping the commandments of him who gave his life for each of us that we might find eternal life—even Jesus Christ.”

As a father, I felt admonished by Elder A. Theodore Tuttle, who eloquently warned fathers against losing sight of their divine responsibilities toward their children in pursuit of prosperity:

“Some fathers provide a good house, clothing, cars, and food, and forget what real fatherhood is. Fatherhood is a relationship of love and understanding. It is strength and manliness and honor. It is power and action. It is counsel and instruction. Fatherhood is to be one with your own. It is authority and example.”

Elder Tuttle’s warning again ties back to the imagery of the workers admonished by President Young. Being a good provider is important, but if we are going to build families that will stand through the millennium, we cannot simply supply physical comforts and sustenance. And I like that we are expected to exhibit “manliness” but righteous manliness.

Finally, I found this observation from Elder Sterling W. Sill’s talk “Thou Shalt Not,” both sobering and important:

Sometimes we fall into the trap of treating sin and righteousness as if they were weights on a scale, and as long as we keep them in balance, or weighted more on the righteous side, they cancel each other out. But the consequences of sin are often not proportional. We do not cancel out sin by being righteous, even if righteousness is part of repenting. Sin is cancelled out by the atoning sacrifice of Jesus, which is applied to us through entering into a covenant with Him. As long as we stay in that relationship with Him, he will cover our sins. Repenting and keeping the commandments are requirements of the relationship.

But repenting and keeping the commandments do not cancel out out sins in and of themselves. He does.

Other bloggers who are writing about the Saturday Afternoon Session of the October 1971 Conference of the Church of Jesus Christ of Latter-day Saints today: