This is this week’s contribution to the ongoing General Conference Odyssey project. My previous posts in this series can be found here.  You can also check out the project group on Facebook.

Posts by other bloggers writing about the October 1971 General Conference today are linked at the end of this post.

Today we are writing about the Saturday Morning Session of the October 1971 Conference.

There were only four speakers in the Saturday morning session of conference in October 1971, three of whom were Apostles. One interesting theme raised by both President Harold B. Lee and Elder Theodore M. Burton, as assistant to the Twelve, was the secularization of organized religion. 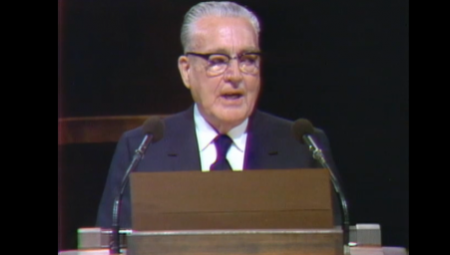 In his talk, “Watch, That Ye May Be Ready,” President Lee quoted from the nationally syndicated newspaper column by Max Rafferty, who was an educator, politician, and commentator:

“Never, it seems, has there ever been more unmistakable evidence of a need for spiritual guidance, as we met throughout our visits in these countries those who are seeking for answers to problems that confront them on every side. We have sensed that everywhere there is much dissatisfaction with the churches to which they have belonged. The real reason for this decline seems to stem from the fact, as one columnist has summarized it, ‘organized religion isn’t being attacked. It’s busily committing suicide trying to keep up with [the] Jane Fonda and Timothy Leary’ type of relevance which would ‘tune out that corny old Bible, split out of that moldy church and turn on with relevance!’ ”

Today, if they think of her at all, many people think of Jane Fonda primarily as an Academy Award winning actress. In October 1971, she was already a movie star, but she was also known for her counterculture political activism. She would win her first Oscar and make her infamous (some would say treasonous) visit to North Vietnam within a year of being mentioned in conference.

Timothy Leary was, of course, one of the intellectual founders of the hippie drug culture. He extolled the benefits of psychedelic drugs, especially LSD, as a mechanism for achieving mental and spiritual enlightenment. The popular sixties phrase “Turn on, tune in, drop out” was the motto for the LSD-based religion he formed in 1966. In 1967 he had published a pamphlet entitled “Start Your Own Religion” in which he encouraged people to form their own psychedelic religions (primarily as an attempt to keep LSD legal through an appeal to “freedom of religion.”)

“My friends in South America told me that people there are so intent on filling their material needs that their spiritual needs are being neglected. Churches are losing their hold on their members. People are not interested in present-day religions, and church influence is declining. People are finding neither comfort nor solace in religious teachings and philosophies.

The same thing is true in Europe and the United States. I suppose it is true all over the world. Churches in many areas are becoming centers of political activism. Ministers and priests are leading protest marches for political causes. Pastors are turning to psychology, psychiatry, and social science in an attempt to serve and fill the emotional and spiritual needs of their parishioners. When sermons are given, they are intellectual masterpieces of learned men trained in schools of divinity as orators, but the heart has gone out of their words. They give messages full of man’s wisdom, but not of God.”

I only want to make a few observations:

First, that social and political ideas are often temporary. I am sure that, at the time, the political, social, psychological, and intellectual ideas represented by Jane Fonda and Timothy Leary seemed permanent. While there is no doubt that remnants of their movements continue to influence us today, their once ubiquitous cultural dominance has long since passed and been successively replaced by other ideas. It makes me wonder which of our modern political, social, psychological, and intellectual ideas will turn out to be long-lived fads. I suspect it will be many of them. Ultimately the only ideas that will never go out of fashion are those that are tied to eternity.

And second, it is foolish to hitch your religion to these kinds of cultural and intellectual fads in an effort to stay relevant to modern ideas and desires. Human beings have real spiritual needs that simply cannot be satisfied by these kinds of long-lived, but ultimately limited and temporary trends.

In the years since President Lee and Elder Burton spoke these words, it has become fairly well established that those organized religions that have adopted trendy progressive and liberal ideas shrink and lose members, while those who have maintained traditional beliefs and demand a lot from their members grow.

When I was a child, there was a fad for brand-name shirts with a little alligator logo on them. Our family did not have a lot of money. All of my clothes were second hand. I remember vividly being made fun of by other children at school for not having an “alligator shirt.” (Looking back, it was the climax of the “Preppy” clothing fad, and what we called the “alligator” was probably the crocodile logo of the Lacoste polo shirts, but the kids called them “alligator shirts.”) I couldn’t understand why it was a big deal, but it still hurt to be made fun of. Years later nobody I know cares about shirts with an alligator logo on them.

In his sermon, President Lee warns us that “only that person or that church (meaning a congregation of individuals, of course) which will stand through these testing years, will be that which is founded upon the rock, as the Master declared, by hearing and obeying the fundamental and never-changing principles upon which the true church is founded, when the winds of delusion blow, or when the floods of filth and wickedness engulf us, or when the rains of criticism or derision are rained down upon those who are holding fast to the truth.”

In the years since 1971, the church has certainly experienced rains of criticism and derision because it will not conform to the latest ideas, the floods of filth, and the winds of delusion. But like the alligator shirts of my childhood, in the long run the derision will not matter.

Other bloggers writing today about the Saturday Morning Session of the October 1971 General Conference: