Today we are writing about the Saturday Morning Session of the April 1975 Conference of the Church of Jesus Christ of Latter-day Saints. 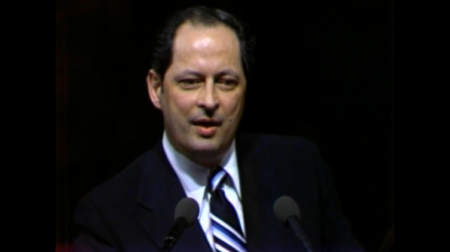 In April of 1975, Robert D. Hales was called as an Assistant to the Quorum of the Twelve Apostles.The Saturday Morning Session of April 1975 was the first time he ever spoke in conference. He would later serve in the First Quorum of the Seventy and then as the Presiding Bishop before being called to be an Apostle in April 1994.

He explained that initially President Marion G. Romney had called his wife and him to serve a mission in London. But a few weeks later he received a telephone call from the prophet:

“Brother Hales, do you mind if we change your mission?”

“I will be glad to go to whatever place you send me.”

He said, “Do you mind if we change it to Salt Lake City?”

And I said, “No, that will be fine, President.”

“Do you mind if it is little bit longer than three years?”

“However long you want it, President.”

Elder Hales describes his feelings by comparing himself to a man who has fallen off a cliff and was desperately hanging onto a limb that was slowly giving way. A voice calls out to him to let go and that he will be protected. “The call was clear,” he said. “I had to let go of everything that I had known and what I had been striving for in my life to become an Assistant to the Twelve.”

Elder Hales was 42 years old. Just before being called as a general authority of the church, he was president of Chesebrough-Pond’s Company. He had worked hard to gain that position after having been the president of the Papermate division of Gillette, as well as an executive at Max Factor and the Hugh’s Television Network.

And then he was asked to abandon his career and plans and serve in the church for the rest of his life. Elder Hales considered this an act of Consecration. He and his wife consecrated their lives to serving the Lord and his church.

He explains consecration with this memorable observation:

“It is not in death or in one event that we give our lives, but in every day as we are asked to do it.”

Sometimes we think of being martyred for the gospel would be the ultimate demonstration of our faith and dedication. But giving our lives by giving each day to the Lord and living it as He asks us to is in some ways a more daunting and difficult task.

I am thankful for Elder Hales and his willingness to give his life up, every day, for the Lord.

Other bloggers writing about the Saturday Morning Session of the April 1975 General Conference today: