This is the latest post in the ongoing General Conference Odyssey project. My previous posts in this series can be found here.  Posts by other bloggers writing about the April 1971 General Conference today are included at the end of this post.

Today we are writing about the Tuesday Afternoon Session of the April 1971 General Conference.

While there were a number of excellent, memorable discourses in this session of conference, I want to highlight the talk “Honesty and Integrity” by Elder Delbert L. Stapley,  who was a member of the Quorum of the Twelve Apostles from 1950  until 1978. 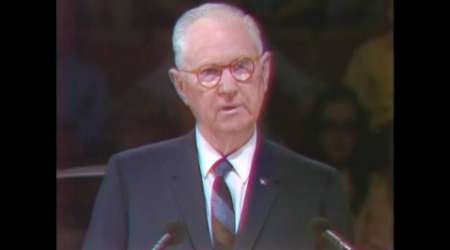 Before I jump into the primary subject, it is fun to notice the dated slang Elder Stapley describes in the opening of his talk:

“My brothers and sisters: This has been a wonderful conference. Most worthwhile messages have been given, which recalls a statement by a young man in his late teens. He sought out his stake president following a stake conference attended by our beloved brother, the late Elder Thorpe B. Isaacson, and enthusiastically said, in the jargon of youth, ‘President, this conference really shook me. Elder Isaacson was really round.’ And then he added, ‘This was a hairy conference.’ Now you dig his meaning.”

From the context, I gather that at some time the use of “shook me,” “really round,” and “hairy” were positive slang phrases. But I get the impression that they may have already been out of use when Elder Stapley gave this talk, with the possibility that “now you dig his meaning” was meant ironically. In any case, if anyone out there knows about the history of this slang I would love to hear about it in the comments.

Elder Stapley spoke about a topic that is very familiar to members of the church: honesty. But even though it is a core principle of the Gospel, I still found Elder Stapley’s discussion interesting and helpful.

“Today, with honesty and integrity among men of high position at a low ebb and becoming lost virtues…The reports of dishonesty, graft, and corruption in government, business, professional, and financial circles in our national life lessen our position and strength as a world leader.”

In April of 1971 the beginning of the Watergate Scandal was still a little more than a year in the future and wouldn’t culminate in the resignation of President Nixon until 1974. But even before all of that came to light, Elder Stapley felt that honesty in public life was at a low ebb.

Elder Stapley suggested that “We see things not as they are, but as we are.” In the context of honesty and integrity, that is an interesting observation. The idea that we project who we are onto what we observe is a very post-modern idea, but it is also true; possibly not infinitely true, but true to a reasonable extent. One of the reasons why we are to be honest is because being an honest person influences how we see and interpret the world. And how we see and interpret the world influences how we interact with the world.

In a similar vein, he also emphasized that honesty is not just something we do, it is an attribute of who we are, and that who we are affects our children:

“Parents cannot give to their children that which they do not possess. All these fine ideals and principles that are a part of the gospel teachings, together with all the virtues that make for good character and good life, should be perfected in each of us. In that perfection they become a part of our nature, and when parenthood comes, these virtues are more apt to be transmitted to our children.

As parents, are we honest with our children? Do they hear us tell little white lies to excuse ourselves from certain responsibilities? Can we blame them too much if they follow the example of their erring parents?”

This passage hit home for me. I consider myself an honest person. However… years ago I wanted to get my children email addresses with a popular online email service. At the time the service required users to be 13 years old or older. But I knew that if I waited for years until they turned 13 the chances of getting a decent email address with their name would diminish. So when the terms of service required me to supply the birth date of the user, I put in the wrong date in order to get around the restriction.

Here were are years later, and in discussions about honesty, one of my children has on multiple occasions cited the fact that I lied about her age in order to get her an email address. It is an issue I often have to re-address when we discuss honesty and rules.

Kids pay attention and they remember.

Later in his talk, Elder Stapley asks a series of very pointed questions that I think worth repeating and contemplating:

“If employers, are we honest with our employees? Do the rules apply to all or are there exceptions, and do these exceptions apply to the same few?”

“If employees, are we giving an honest day’s work? Do we fudge on the lunch hour, or take time to run unnecessary errands under false pretense?”

“In dealing with our fellowmen, do we give more than is expected, or do we try to get by with the minimum amount of service?”

“If in business, do we ‘pad the bill’ to get a little extra benefit we are not entitled to, thinking that no one will ever know?”

“And you teachers, are you honest in the grades you give? Do you mark according to what the student has earned, or do you let personalities interfere?”

“And on behalf of students and youth, do we honestly and sincerely listen to their wants and needs? Do we really try to understand them, or are we giving them what we think they should have?”

“And those of us who teach in church organizations—are we honest in living as we teach, or do we have a double standard?”

All of these questions call for a level of introspection that really stood out to me. Sometimes we can take for granted that we are sufficiently honest, and overlook ways in which we are not as honest as our self image suggests.

Applying the rules more rigorously to certain employees, or being selectively more lenient or rewarding to others can be a form of dishonesty. This can be harder than it might seem. It is easy to look past the errors of others when they “click” with our own personality. And it is easy to be too eager to jump on the infractions of those who tend to rub us the wrong way.

Similarly, in the case of teachers grading students, care must be taken to judge work and impose grades fairly. This is also far more difficult than we might assume. Grading and evaluation of students is already fraught with conflicts over methodology and pedagogical theories. Do you grade a student based on his progress in relation to where he started, her effort, or against a fixed standard that is the same for everyone, but doesn’t take into account individual effort or progress? Are they graded in relation to each other or against some ideal? On a curve or against a fixed scale? This can get especially tricky when there are personality conflicts or favorite students.

Elder Stapley’s even suggests that pretending to be attentive and listening to the wants and needs of others, when we have really already made up our minds to give them what we think they should have, can be a form of dishonesty.

These are radical ideas in our modern society where significant numbers of people judge right and wrong by the standard of what-you-can-get-away-with.

Elder Stapley makes another observation that I think gives good insight into this level of honesty:

“Throughout our lives we must correct not only the mistakes made against us, but also those in our favor. Now that seems a simple thing, but in the building of character it is very important, for little omissions lead to more serious errors and subtle practices… One never loses an opportunity to call attention when a mistake occurs against him. Honesty, to be true and perfect, must work both ways.”

I suspect most people are familiar with the idea that if the cashier at the store gives you more change than he or she should have then honesty requires that you identify the mistake and return the excess change. But Elder Stapley’s more generic construction was interesting and helpful: just as we feel obligated to correct mistakes that are made against us, we ought to feel obligated to correct mistakes that benefit us instead of taking advantage of them.

One example I can think of is something I have seen sometimes at work. On occasion, the credit for a good idea, a good solution, or well done work has been wrongly credited to me instead of the person who actually deserves the credit, simply because I was the person who articulated it or was most visibly involved. I believe that I have made an effort to correct the perception and redirect the credit to the person to whom it was due, but it is something that I should be more careful and conscious about.

I’ll have to contemplate this principle more and see what other applications it might have.

I consider myself a honest person, but Elder Stapley’s sermon made me want to be more careful and more exact.

Finally, I want to highlight a short sentence from the discourse that I think is very, very important:

Dishonesty is a tricky matter, especially in children, but really with anyone. We should be careful about how we structure rules so that we don’t accidentally incentivize dishonesty. Making a mistake, or breaking a rule, or committing sin is always complicated by covering it up through lies and deceit.

Lies not only undermine relationships, they create feedback loops that re-enforce and perpetuate more dishonesty. But unjust rules and laws and unrighteous dominion encourage lying.

As parents we need to be very careful that we do not establishing rules that are unjust or punishments that are disproportionate or abusive, or otherwise exercise unrighteous dominion because doing so will create dynamics that incentivize dishonesty.

This is true in business as well. It is easy to inadvertently create an environment that incentivizes dishonesty; where employees are afraid to be truthful, and information gets distorted and leads to bad decisions. Being truthful should be rewarded and encouraged, even if it isn’t what we want to hear.

I am thankful to have been able to read Elder Stapley’s words and consider how I can be more honest, and how I can establish dynamics in my home and my work that encourage honesty and discourage lies.

This was a “hairy” conference indeed!

Read posts by some of the other bloggers writing about the Tuesday Afternoon Session of the April 1971 General Conference today: