Doubting Darwinism – 150 Years of The Origin of the Species 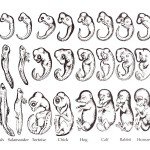 Today marks the 150th anniversary of the publication of “The Origin of the Species” by Charles Darwin.  If you’ve followed this blog for a significant time you know that I have doubts about the compatibility of Darwinism and the belief in God as the Creator.

I remember as a high-school biology student, in addition to various other evolutionary facts, our teacher showed us the famous Heackel drawings of the developmental stages of embryos. He made us all memorize the phrase “ontogeny recapitulates phylogeny.”  And he insisted that it was a scientific “fact” that proved that Darwin’s theory was undeniably true.  It was all very convincing and I believed him.  As a faithful member of the LDS church I reasoned that “evolution” was simply the device which God employed to bring to pass the creation.  This was in 1989 and little did I know that the “ontogeny recapitulates phylogeny” hypothesis had, even then, been long discredited. 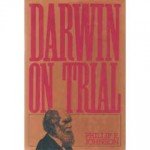 After graduating from high school, going on an LDS mission, and then attending BYU for a number of years, I found myself once again taking Biology, this time as a graduation requirement.  It was 1998.  As I wandered the BYU bookstore, scanning the biology books, I ran across a funny looking book with a golden colored cover with red letters spelling out the curious title “Darwin on Trial,” by Phillip E. Johnson.  It had been published in 1991, but this was the first time I had heard of it.  Johnson had an impressive resume, graduate from Harvard and the University of Chicago, former clerk to U.S. Chief Justice Warren,  and professor at the Boalt School of Law of UC Berkeley. He was not trained in biology, but he was an expert in logical argument and evidence in the realm of law.  I sat in the book store for a couple of hours, missing several of my classes, as I read his critique of Darwinism.  I went back another day to finish it.

I imagine I felt a little like some members of the LDS church feel when they innocently stumble upon some of the historical aspects of the church that appear to contradict their understanding of the church.  Johnson made some very astute observations about evolution.  He exposed some glaring logical fallacies. This well educated, intelligent man doubted Darwinism and made some good arguments that needed to be addressed. And a number of the undeniable “facts” I had been taught were simply not true.  “Ontogeny recapitulates phylogeny” was a long discredited hypothesis.  I felt deceived by my high school biology teacher.

Well, it had been nearly ten years.  I remembered that my teacher had also told us that our scientific knowledge of biology was doubling every five years. Now I was taking a BYU biology class.  Surely with our greater knowledge these issues would have been addressed and new, potent evidence for evolution would be available.  As fate would have it, within a couple of weeks of reading “Darwin on Trial” my university biology class covered the unit on “Evolution.”  I was shocked to find that the textbook was still touting peppered moths and embryological parallelism (even including Heackel’s bogus drawings).  It seemed that nothing had changed.  I had taken years of physics and chemistry at both the high school and college level.  I knew how science was supposed to work.  But there was no mention of the challenges put forward in Johnson’s book let alone an attempt to address and refute them, at least in the biology course that most students would be required to take as a graduation requirement.  It felt like propaganda instead of science.  I was thoroughly disillusioned.

A year or two later I was taking a class on Victorian era English literature.  One day the professor broached the subject of evolution.  I was interested to see if the English department would approach the subject differently, but again I was disappointed.  Evolution was a “fact.”  The professor made it clear that anyone who doubted it was either uneducated, a fool, or wicked.  I was the only student who would openly admit to doubting Darwinism in the class.  I lent a copy of Johnson’s book to my professor.  It was returned to me by mail some time later without comment.  I don’t even know if he ever read it.

I have followed the “Intelligent Design” vs “Evolution” debate ever since.

The crux of my problem with “Evolution” is as follows:

I accept that species adjust to their surroundings through micro-evolutionary adaptations.  This is an observable fact.

I can accept that there has been a succession of species which have evolved from one into another.  There is quite a lot of evidence for this.

But I cannot accept Darwin’s hypothesis that a completely unguided mechanism of accumulated micro-evolution by random mutation and natural selection is solely responsible for the complete genesis of the plenitude of biological life. There is very little evidence supporting this mechanism and because it requires such unfathomable time frames it is also completely unobservable.  By its very definition Darwin’s mechanism excludes the possibility of a supreme being employing evolution as the device for teleological creation.  The minute you say God “used” evolution you have become a “Creationist” because Darwin’s hypothesis does not permit evolution to be “used” by an intelligence at all.

An address to BYU by Elder Marion D. Hanks was printed in the July 1981 issue of the LDS Church’s Ensign magazine. He said:

I know that man is co-eternal with God, and that he clothed us in spirit form and then made it possible for us to have eternal life, through his gift, through his love. I know that, with his Son, he is our Creator and that his children are his special and crowning creation. But I take great comfort in personal conversations I had with President David O. McKay some years ago when I was concerned with these matters. His answer was about what I have given you. He said, ‘It would do no violence to my faith to learn that God had formed man in one way or another.’

If you believe that God has a purpose in creation, and that he guided it to his own ends, then you have automatically rejected Darwin’s unproven mechanism.  You may still believe in the “fact of evolution” (micro-evolutionary adaptations and a succession of species) but you reject Darwin’s “Theory of Evolution” (i.e. that this observable “fact of evolution” is solely the result of his proposed purposeless, materialist process).

Accepting the “fact of evolution” but rejecting Darwin’s hypothetical anti-teleological mechanism seems to me to align well with the LDS Church’s position on Evolution. We do not know by what means God brought the creation to pass.  But we do know that it was brought to pass by His will and to fulfill His purposes.  Any theory that rejects this is incompatible with the revealed Gospel.

Personally, I like the theory of “Front-Loaded” evolution, wherein the basic building blocks of life were pre-configured with sufficient information to generate all of biological life.  This information would then be activated through the natural complex feedback loops and attractors of reproduction to produce the succession of species we observe.  That way mutation and natural selection do play a role, but are not the sole mechanism of creation because their creative power is only made possible and set in motion by the inclusion of intelligently organized information.  It’s just a hypothesis, but I like it and hope to see some research in that direction.

Darwin Doubters like me who express their doubts on blogs are frequently labeled “uneducated , fools, or wicked”  and so there are few who will openly admit to their doubt, just like in my English class years ago.  The fact that Darwinists so often react this way to evolutionary apostates is just another hint that it has become more of a dogma than a science.  At a very minimum if you don’t want schools to “teach the controversy” then you shouldn’t be calling for the Church to do so with regard to its history.  And if you complain that members of the church are not familiar enough with the critic’s views of the church, then maybe you should pick up a clutch of modern “Intelligent Design” books and read them all from start to finish.  If you’re going to presume to judge the Church of God then you should be at least as presumptuous for the Church of Darwin.

Some books to check out:

Darwin on Trial 2nd Edition 1993 by Phillip E. Johnson- somewhat out of date, but still a great introduction

The Edge of Evolution 2008 by Michael J. Behe

The Signature in the Cell 2009 by Stephen C. Meyer