A One Cent Coin From Nauvoo

A couple of weeks ago we were helping my parents move a lot of their stuff into storage.   In the last decade, they have moved at least ten times, and, as I’m sure you know if you have moved frequently, there are some boxes that just get shuffled from one home to the next without ever getting unpacked or sorted.  As we were sorting stuff and stacking boxes, I ran across a box of apparently random stuff.  In it there was a small metallic container. I picked it out and opened it up to see what it held. Inside there were two old plastic bags, one containing some kind of white stuff and the other a yellow substance, and tucked in with them was an old coin. 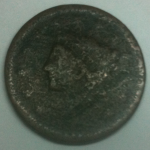 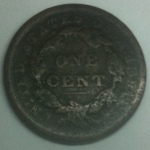 My father said that he believed that the white and yellow stuffs were frankincense and myrrh that some friends had brought them back from the Middle East.   The coin I vaguely remembered from a family vacation we had taken many years before.  It was a road trip from Utah to New York and Washington D. C. and back, stopping along the way to visit sites from U. S. and LDS Church history.

The city of Nauvoo, Illinois, was founded by the prophet Joseph Smith and the Mormons in 1839 after they had been driven out of the state of Missouri.  Between 1839 and 1846 when it was finally abandoned by most of the Latter-day Saints, it had grown to be the second largest city in the state next to Chicago.

While we were visiting Nauvoo those many years ago, we had gone over to edge of the town to the banks of the Mississippi river.  I remembered that my father had spotted a coin half-buried in the mud of the river bank.  He picked it up and washed it off.  It looked old, and he wondered if might be old enough to have been from the time the Saints lived there.

Somehow, after the road trip and many years, the coin had been mostly forgotten until I found it in the little metal box.

Though the coin is very worn, especially on the obverse side, after doing a little research we are fairly certain that it is a Large One Cent Liberty coin, featuring the Coronet Head Braided Hair design that was minted in the United States from 1839 to 1857, right during the Nauvoo period until about 10 years after the Mormons left for what would eventually become Utah.

This particular coin is probably too worn to be worth very much compared to others of the same type and date.  Who knows if it had actually been used by someone in Nauvoo or if it had been carried by the water from elsewhere upriver.  But the fact that it was found by my own father on the banks of the Mississippi in Nauvoo and dates to the very era when Joseph Smith and the LDS Church were there, makes it a valuable treasure for us that connects us to our history and heritage.

Looking at the coin I can imagine the prophet Joseph Smith and his brother Hyrum crouching in the darkness in the mud of that very river bank, before climbing into a small boat with Porter Rockwell who would row them to the opposite side so they could escape to the west, only to return the next day at the insistence of family and friends and be murdered days later by a mob of conspiring, wicked men.

You never know what you’ll find in your parents’ stuff, or in the mud!

One Response to A One Cent Coin From Nauvoo