Why is the Health Care Law Unconstitutional? 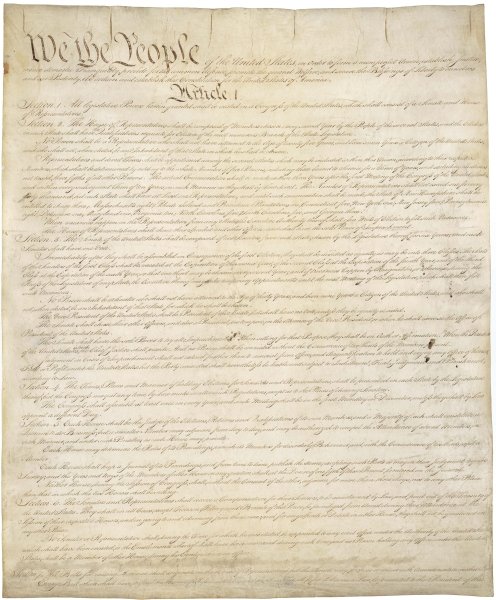 Since the passage of the health care law on Sunday, a lot of us have challenged its constitutionality. Even before it was passed we suggested that it would violate the constitution. But since it’s passage I have seen a lot of friends and family who support the law say they don’t understand why we think it is unconstitutional. They often cite the “general welfare clause” of the constitution and laws that require automobile insurance to justify the law under the constitution.

Up front let me say, as I have before, that the current health care system is the pits, unsustainable, and that insurance companies are corrupt. That insurance coverage is intertwined with your specific employer, that it is so much more expensive for individuals, that people are denied coverage because of preexisting conditions, and that we pay for routine care through insurance claims (which is like paying for gas for your car through auto insurance claims), are all terrible, illogical aspects of what we currently have. It needs to be overhauled.

That said, a benevolent king could easily use his sweeping powers to fix the system and provide health care for all in the most efficient and timely manner. But the dangers of establishing a monarchy would far outweigh the advantage of the universal health care he could provide. That is why in overhauling health care we need to make sure that it happens in a way that is consistent with the constitution and correct principles of just government.

The Constitution enumerates limited realms over which the National government has power. There are explicit powers in the constitution, and then there are implied powers which are accepted because without them the national government wouldn’t be able to exercise the stated powers.

A law or action by the national government is constitutional if it is within these enumerated or implied powers. If it oversteps those powers, then the law should be invalidated by the supreme court.

The health care law mandates that all people in the nation purchase insurance whether they want it or not. Supporters often point to mandatory automobile insurance laws as a parallel example.

Automobile insurance is NOT required by national law. It is the individual states who require automobile insurance, and the requirements vary widely from state to state. That is a crucial distinction. If the national government tried to require auto insurance, that too would be unconstitutional. Additionally even at the state level they also do not require all citizens to buy auto insurance. It is only a requirement if you want to get a driver’s license. Driving is a privilege and not a right. Those who do not want to drive are not required to have insurance. If a state required all citizens to buy insurance, whether they drive a car or not, that could arguably be unconstitutional too.

The health care law, unlike the auto insurance laws, is a national law and it requires everyone to buy insurance whether they want it or not.

So with health care we have to ask where in the constitution the national government derives its power to regulate health care and to force citizens to buy health insurance even if they don’t want it?

Supporters point to the ‘General Welfare” clause of the constitution.

The “General Welfare” clause is part of the preamble of the constitution, not the enumerated powers. The preamble states the objectives that they intend to accomplish through the powers and structures that follow. It does not grant any powers itself. The objectives are:

After the preamble, the articles of the constitution establish a system that the authors believed would correctly balance and accomplish these objectives. Has it worked perfectly? No. But it provided a process by which the structure could be amended when it wasn’t working correctly. If the constitution is not working, it should be amended. Otherwise, the government must operate within its parameters.

So the health care bill cannot be reasonably justified by the General Welfare clause.

Originally the Bill of Rights only applied to the national and not the state governments, but the courts have used the due process clause of the 14th amendment to allow the national government to invalidate state laws in order to protect individual natural rights and penumbral rights implied by those natural rights. So if health care is a right, then the national government might be able to justify the health care bill through the 14th amendment. However, that health care is a “right” is highly debatable in general, and completely inconsistent with the understanding of rights employed by the founders. See Is Health Care A Right? . If it is a right then the constitution should have to be amended to include it since under the current formulation it is not. So it is highly unlikely that it is constitutional through the 14th amendment.

Finally, the constitution allows the national government to regulate interstate commerce. It already uses that power to prohibit the sale of Health Insurance across state lines, even though it allows other forms of insurance to be sold.

But it is quite a logical leap to get from regulating interstate commerce to mandating individual purchase of insurance, especially since by national statute health insurance purchases do not cross state lines. Plus, there is no historical precedent that would imply that regulating commerce can be interpreted to mean forcing commerce (since that would conflict with the objective of liberty).

I hope that helps explain why we believe the health care law to be unconstitutional and why we fear it.

“Although that Preamble indicates the general purposes for which the people ordained and established the Constitution, it has never been regarded as the source of any substantive power conferred on the Government of the United States or on any of its Departments.”

It has been brought to my attention, however, that there are actually two references to general Welfare in the constitution.  The second is in the Taxing and Spending clause of Article I Section 8.  This is the general welfare clause that could be cited to justify national action.  It says:

The interpretation of this general welfare clause has been hotly debated since the very beginning of the republic.  Much of the most contentious political battles between the Federalists and the Democratic-Republicans revolved around how expansively this general welfare clause could be interpreted. The triumph of Thomas Jefferson in the election of 1800 represented a repudiation of the expansive interpretation of the Federalists.   This narrow interpretation was the norm until 1936 when the Supreme Court overturned it in the case of United States v. Butler and then in subsequent cases about the constitutionality of the New Deal laws of the Franklin Roosevelt administration.  However, even though United States v. Butler did overturn the traditional interpretation of this General Welfare clause, it also struck down the New Deal law that imposed a tax on processors of farm products and then used the revenue to be paid to farmers who would reduce their area and crops because it violated the 10th Amendment which reserved powers not enumerated to the States or the People.

Most of the expanding power of the national government since FDR’s New Deal have been justified under this new interpretive approach.  The new health care law could potentially be upheld under that same framework, but the fact that it actually forces consumers to purchase a product contrary to their own preference is unprecedented and would represent a new innovation in constitutional interpretation well beyond anything ever done by New Deal laws.

8 Responses to Why is the Health Care Law Unconstitutional?