Which Actor Will Play The Part of President Mitt Romney (Or Whoever Wins The 2012 Election)? 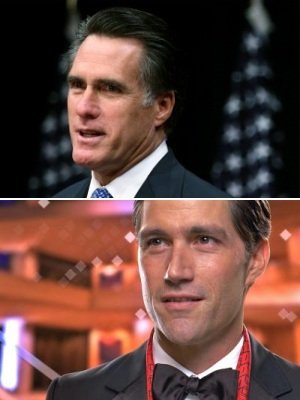 Over the weekend I got a chance to see a portion of the 2008 movie Speedracer.  I only saw a couple of scenes, so I’ll have to go back and watch the whole thing, but the portion I saw featured actor Matthew Fox (who also played one of the main characters in LOST) as Driver X.

I don’t have anything to say about the movie, but I was struck by how much Matthew Fox looked like current Mormmon Presidential Candidate Mitt Romney.  If  Romney is ever elected President of the United States, my money is on Fox to play Romney in whatever theatrical creation eventually results.

So what about the other current candidates or potential candidates?  If any of them were to become President, who would play them in the inevitable movie that will someday be created?

Who will play President Obama?  (I don’t want him to win a 2nd term, but since he has already won a first term he’s sure to get a movie.)

Make your nominations for the actor to play any of these candidates.

2 Responses to Which Actor Will Play The Part of President Mitt Romney (Or Whoever Wins The 2012 Election)?