Vote in the Utah 2010 Primary Election – Information and Endorsements

Hi. This is Regina work. Sort of. I’m calling to set the record straight about my friend Mike Lee. The truth is the bikes the key part of all the clear waste out of Utah we work together. I’ve got her husband’s Council. He stopped it from being transferred across our highways ad for big story, it does West desert. You may not know but my ex father. Rex week passed away from cancer related to be there with her. So, if you might expect. Mike, please record his commitment to keeping you talk to say from high level nuclear waste a second not anybody who tells you otherwise. If it’s a resort. It’s a last minute mislead attack ads for the role personal game. That’s the truth. Again, I’m not sure of the calling to set the record straight, and I encourage you to join me support likely the upcoming primary election. Thank you. Goodbye just calling to pay for. I found it and I agree.

That’s right, the primary elections are here in Utah once again! Tuesday June 22 is election day so make sure you take the time to vote.  If you are registered to vote, you can find out the location where you should vote at the Utah State website.  The site will also tell you what party you are currently registered with and let you see samples of both the Ballot for your party and the non-partisan elections for your area.  Also check out Abigail Adams Project – UTAH for information about the candidates.

If the erroneously transcribed voice mail above was complete nonsense to you, then don’t worry, a lot of the information that has been published during this campaign has been just as messed up even when properly transcribed.

I’ve been participating in local Utah elections actively for the last six years, and every time the dirty politics, acrimony, and enmity is thoroughly discouraging.  For example, last Saturday I received the two campaign fliers in the mail from the Bridgewater campaign.  Here’s a photo: 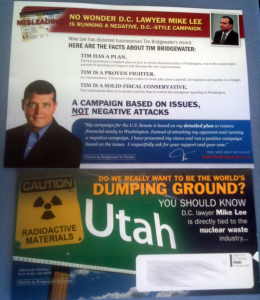 Tim Has A Plan.

Tim Is A Proven Fighter.

Tim is a solid Fiscal Conservative

A campaign based on issues, not negative attacks

Do we really want to be the world’s dumping ground?

You should know D. C. Lawyer Mike Lee is directly tied to the nuclear waste industry…

Now the accusations here are not really that important.  It’s the irony, the cliché, and the pettiness. “Hey! I’m negatively attacking my opponent by pointing out his negative attacks!  So vote for me because I’m campaigning on the issues and not negative attacks….P.S. See the photo of my opponent looking angry?  I told you he was negative.  P.P.S. Did you notice that I’m not wearing a tie and have a blue shirt?  I’m cool like that. I’m anti-establishment. P.P.P.S. Did you know that my opponent is part of a conspiracy run by an evil organization owned by radioactive SATAN? So freak out and vote for me instead.”

Mike Lee’s campaign hasn’t been much better when it comes to magnifying to distortion some of Bridgewater’s background. Here’s Bridgewater’s response to some of the Lee campaign’s claims.  Others have responded to Bridgewater’s Energy Solutions accusations against Lee.

And then there is the whole “fake flier that appears to be from Mike Lee but is really from an anonymous group against Mike Lee that was intended to trash his campaign by making it look as if Lee was leveraging religion to trash his opponents when he really wasn’t, which was facilitated by a former long-time Senator Bennett staffer.”  If that seems incomprehensibly convoluted to you that’s because it is.  It’s a reverse-psychology dirty-trick you see.

Does your brain hurt yet?

The sad thing is that both of these men would probably be good, solidly conservative senators, probably.

Tim Bridgewater is an experienced businessman who truly believes in the free market, and understands the real-world consequences of National interference in the economy, taxes, and health-insurance.  He truly believes in limited government and is a real fiscal conservative with practical experience.

I’ll be voting for Mike Lee.  Why?  Here are my reasons:

2. The reverse-psychology dirty trick mentioned above really makes me angry.  Using those kinds of tactics to defeat a candidate makes me think that he must be a threat to the establishment.  And the fact that it was facilitated by a middle-man who was a D.C. staffer for Senator Bennett for many years reinforces that perception.  Dirty tricks by Establishment Republicans = vote for their target

3. Bridgewater’s ironic “my campaign is based on issues not negative attacks…Mike Lee is an evil, radioactive corporate pawn” fliers were craptastic.  Good bye moral high ground.  I first heard the Energy Solutions/Nuclear Waste attack against Lee in my caucus meeting from people who were big Bob Bennett supporters. Contradictory moralizing = fail!

4. I was attracted to Lee early on because of his firm understanding of the Constitution.  However, I was honestly worried about his positions because of some of the more radical conservatives who were rabidly supporting him and even linked to his campaign.  I contacted the campaign with my concerns.  I received a personal call from Mr. Lee and he chatted with me about his views, and those of some of his supporters for a good half an hour.  He and I don’t agree on everything, but he isn’t a Birther, or a 9/11 Truther, or any other kind of crazy.  Serious constitutional conservative – the crazy = my vote.

5. While I find Bridgewater’s business experience appealing, Free Market principles and practical experience alone are not going to be enough to get us out of the mess we are in.  We need someone with a solid, comprehensive, personal understanding of constitutional principles.  Bridgewater may not like D.C. Lawyers, but since his experience is in business not constitutional law, he’s going to have to hire a bunch of them to advise him if he wins anyway.  I’d rather have a candidate with an expert knowledge of the Constitution himself, and experience in applying it.  Outsourced constitutional knowledge = Fail! (If Bridgewater does win, I hope he’ll hire Mike Lee to advise him and vise-versa. Lincoln-style Appointing rivals = Win!)

Anyhow, visit the candidate’s websites and vote for whomever you think would be best.

I also feel strongly that we need some changes in the Alpine School District.  Consider voting for the following candidates: