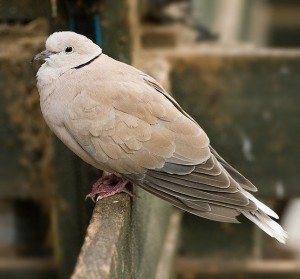 As a child and a young man I owned a lot of pets.  My poor mother, who is not a “pet person” at all, was more than a little patient with my ever expanding zoo, which overflowed from my bedroom into many other parts of the house and yard.  A lot of my earliest spiritual experiences involved pets.  I experienced the magic and excitement of new-born life and the sting and stillness of death in a very real, personal way.

My collection of life included a number of different birds.  I had a parrot, cockatiels, budgerigars, zebra finches, canaries, a rooster and some hens, a bantam rooster and hens,  ducks, homing pigeons, and ring-neck doves.  I didn’t get an allowance and breeding pets, especially doves, and selling them to Utah Valley pet stores was my primary source of income.

Close personal contact with doves, especially in contrast to the other birds I had,  gave me some insights into why the dove has been used as a symbol of peace, and in the scriptures as a sign for the Holy Spirit of God.

Parrots and parakeets have sharp, hooked bills and when they feel threatened or trapped they will squawk and screech, complain and murmur, and give you a painful bite– sometimes drawing blood.

The miniature bantam rooster, bred for cock-fighting, would take offense at my mere presence in the coop.  He would stand between me and the miniature hens, puffing up his feathers and strutting aggressively.  If his absurd show of lilliputian strength didn’t frighten me off, he would attack me viciously, and with surprising effectiveness, by jumping up and kicking me painfully in the shins with the sharp spurs on the backs of his legs.

The other chickens bore their name well.  They would scurry and run, unable to fly for more than a few feet, dodging left and right like tiny female football players avoiding being tackled. But the minute they felt even slightly cornered (in fact or only in their tiny imaginations) they would freeze and assume  a funny cowering position with their wings lifted up slightly, like shoulders in a shrug that said “I give up!  Don’t hurt me.”

The smaller finches and canaries fluttered and jumped all around the cages, never giving up like the chickens, until they were caught.  Some might protest and nibble at your finger, but without the sharp hooks of the parrot, their struggle was completely ineffective.

Which brings me to the doves.  Ring-neck doves have been bred in captivity for between two-thousand and three-thousand years. They are known for their gentle nature.  This is especially apparent when they feel trapped.  Of course, if the doves can fly away they will.  But if they cannot, they don’t scramble like the chickens and then give up all of a sudden; they don’t murmur and complain and bite like the parrots and budgies; they don’t strut and then attack like the bantam rooster;  they simply raise the one wing closest to their perceived assailant in a gesture of peace and submission.  They don’t bite or nip. There is no aggression and no visible panic.  Even after they are in hand they do not complain or bite.

However, if they are protecting their eggs or babies, they will sometimes bite.  I never had a dove bite me to protect itself, only to protect its young.  There is a nobility in the dove that turns its gentleness into gentility.  At least that is my own experience with them.

It is easy to project peace when all is well. But when the master reaches out toward us to examine us and we feel trapped and cornered and scared, how do we respond?  Are we parrots? Are we chickens? Are we fighting cocks?  Or finches?  Or are we doves? 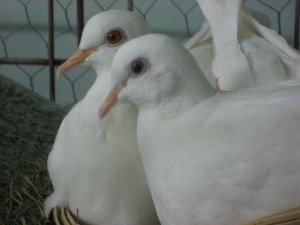 I had a particular pair of doves that were my primary producers.  The male would repeatedly bow to the female, while cooing to her until she would agree to mate with him.  I could count on them to regularly produce two eggs, like clockwork, every six to eight weeks.  The male and female would both take turns incubating the eggs, or even sit on them together, and both would feed and care for the babies once they hatched. I would move the pair of babies into a different cage once I was sure they were feeding themselves, and then sell them to a pet store.

Then suddenly, one day the eggs didn’t hatch.  I carefully removed the eggs, removed the shade from the lamp in my room and held them up to the bulb for candling.  Normally I would be able to see the developing blood veins in the egg in the early stages of development, and later a tiny baby bird through the back-lit eggshell.  But this time there was nothing.  The eggs were unfertilized.

I waited a week and tried again just to be sure, and then disposed of the eggs.  The pair soon had another set of eggs.  I candled them.  Nothing.  Suddenly the birds were not fertile.  I tried various methods of fixing it.  I changed the diet.  I clipped the feathers around their cloacae to make sure that they were able to mate properly.

The eggs were all infertile.  My only source of income was gone.

Finally I turned to prayer.

A question came to me:  Had I paid tithing for the last set of doves I had sold?  Usually I had been diligent about paying a tithe on the money I made from my birds, but I realized that this time I had not.  That Sunday I took one tenth of the price I had charged for the last pair of baby doves with me to church, filled out the tithing donation form, put it in the donation envelope, and gave it to a member of the Bishopric.

A week or two later I carefully removed the newest pair of eggs from the dove’s nest.  I removed the shade from the lamp in my room and held the eggs up to the bulb.  Through the shell I saw the red outlines of veins, branching out from an amorphous  mass inside the egg.  They were alive!

This simple experience will be dismissed or mocked by some.  But for me it was profound.  It is hard to describe the impression it had on my young faith.  I had prayed over lost or sick pets before, and God had answered my prayers.  But suddenly my relationship with God changed.  He had the power over life and death.  He could make a Dove infertile or give barren Hannah, or the virgin Mary, a son.  Ultimately, He had complete control over my ability to prosper, to make money, independent of my effort.  And I had obligations to him.