Original Poetry: By the Hand of Uriah 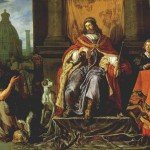 In the months I was preparing to visit Israel last year, I listened to a great deal of the Old Testament while riding my bicycle to and from work. Listening instead of reading helped me approach the scriptures in a way that prompted new insights and ideas, and I unexpectedly found that listening inspired me with some ideas for poetry to write.

Though I am not a prolific poet, the poetry I write is usually infused with gospel concepts and imagery. But I had never thought of poetry so directly inspired by scriptural narratives before.

As is usual for me, the time between when the idea for a poem occurs to me and when I actually write it is substantial. It has been well over a year, and I am now approaching the one year anniversary of my trip to Israel for Sukkot, the Feast of the Tabernacles.

This last Sunday, I sat down and wrote a draft of the first poem, and then honed it during the next day and a half. Hope you enjoy it.

Just open it! one roared a goading taunt,
and then the rest in chorus joined the dare.
We face the foe alone, the king doth not,
so open up the letter that you bear.

For not a moment tempted was his eye.
Oh faithless fools! he shouted as he stood.
Though least among his mighty men am I,
with Israel’s king I stand; his word is good.

My honor tried by query of the king,
though sore I yearned to know my wife once more,
while cov’nant’s ark in tent doth dwell, such thing
I would not do and slept outside the door.

To my hand commends the king what he did write.
In vain his trust is not, as God’s my light!

Read more of my original poetry.

One Response to Original Poetry: By the Hand of Uriah