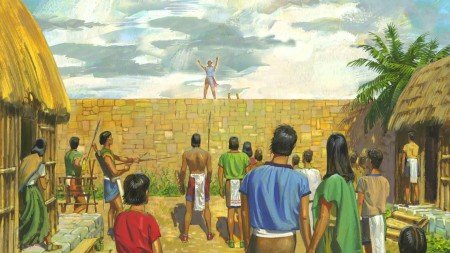 As I have mentioned before,  self-styled “Intellectual” and Liberal Mormons are just as susceptible to proof-texting, unexamined cultural constructs, and their their own set of folklore as anyone else.

In the Book of Mormon account of the visit of Jesus to the descendants of Lehi in the New World, after his resurrection from the dead, the scriptures recount that Jesus reviewed the scriptural records kept by the prophet Nephi.

During the last few years, I have periodically encountered members of the church who have imposed a reading on that portion of the Book of Mormon that goes something like this:

“When Jesus reviewed the scriptural records of the Nephites, he discovered that they had not recorded the prophecies of Samuel the Lamanite. (Reading between the lines) It was probably because Samuel was a Lamanite and the Nephites were racists. Not only that, but Samuel was from outside the existing church leadership. So Jesus reprimanded Nephi for not recording the prophecies of His servant Samuel and instructed him to correct the record.”

Then, applying this scriptural retelling to their own lives, they suggest that dissident voices inside and outside the church are the modern analog of Samuel the Lamanite, similarly rejected by the mainstream church and marginalized by church leadership because of bigotry, prejudice, and hierarchy. And if and when Jesus comes again, they suggest, He will reprimand the church and its leaders for ignoring the words of these modern Samuels.

But this retelling isn’t what actually happens in the Book of Mormon. It is a superficial misreading of what the record actually says.

7 And it came to pass that he said unto Nephi: Bring forth the record which ye have kept.

8 And when Nephi had brought forth the records, and laid them before him, he cast his eyes upon them and said:

9 Verily I say unto you, I commanded my servant Samuel, the Lamanite, that he should testify unto this people, that at the day that the Father should glorify his name in me that there were many saints who should arise from the dead, and should appear unto many, and should minister unto them. And he said unto them: Was it not so?

10 And his disciples answered him and said: Yea, Lord, Samuel did prophesy according to thy words, and they were all fulfilled.

11 And Jesus said unto them: How be it that ye have not written this thing, that many saints did arise and appear unto many and did minister unto them?

12 And it came to pass that Nephi remembered that this thing had not been written.

13 And it came to pass that Jesus commanded that it should be written; therefore it was written according as he commanded.

It doesn’t even take a close reading to see that the liberal retelling of this scriptural account doesn’t hold water.

It wasn’t that the Nephite records had excluded the prophecies of Samuel. His prophecies were recorded in detail in chapters 13 through 15 of what is called the Book of Helaman and played a significant role in the events that followed.

There are two possible ways two read this account:

The first possible reading is that as Jesus reviewed the record of Samuel’s prophecies, he saw that there was a small omission in the record: Samuel had prophesied that at the time of the crucifixion and resurrection, “many graves shall be opened, and shall yield up many of their dead; and many saints shall appear unto many.” This small, but important detail had been left out of the record. So Jesus was making  a small correction. And Nephi amended the record. (Presumably by adding what is now verse 25 to the 14th chapter of Helaman.)

The second possible reading is that the record of Samuel’s prophecies is accurate and sufficiently complete and that Jesus sees no reason to correct it. Rather, the issue that he raises with Nephi is that they have neglected to record the fulfillment of one detail of Samuel’s prophecy; that, just as he declared, the graves were opened and the dead appeared unto many at the time of the crucifixion and resurrection. The crux of this reading is verses 10 and 11. Jesus asks Nephi whether that portion of the recorded prophecy was fulfilled. Nephi confirms that it was. And Jesus asks why they did not record its fulfillment. Nephi recognizes the missing record of fulfillment and amends the record with this very account of Jesus pointing out the omission and his own testimony that it was fulfilled (verse 10).

Honestly, I prefer the second reading, which to me seems the most correct.

Neither of these readings are compatible with the liberal retelling, which, upon examination, seems completely independent of and incompatible with the actual text of the Book of Mormon. It is simply a convenient intellectual “just-so-story” with only the most superficial basis in the scriptures.