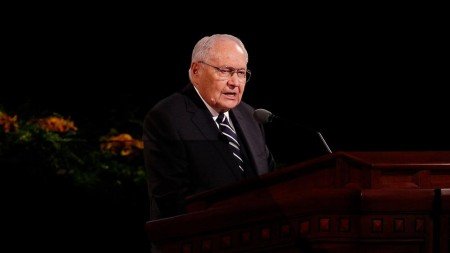 Yesterday, Elder L. Tom Perry of the Twelve Apostles of the Church of Jesus Christ of Latter-day Saints passed away.

I had the opportunity to meet Elder Perry twice.

The first time was as an LDS missionary serving in Santiago Chile in October of 1994. We had a multi-mission conference at which he spoke.

In my missionary journal I recorded that he spoke about the Book of Mormon. He taught us that it is the foundation of our religion and that we needed to use it more. He also shared with us his own program for studying the scriptures. Elder Perry told us that he read the entire standard works (The Holy Bible, The Book of Mormon, The Doctrine & Covenants, and The Pearl of Great Price) straight through from beginning to end every year. He explained that reading them this way provided continuity and context. In addition to reading from beginning to end every year, he also studied regularly by subject, so that he would have an in-depth knowledge of what the scriptures say about specific topics. I remember that his example of scripture study left a lasting impression on me.

Regarding missionary work, he taught us that the church needed real converts, not just numerical baptisms and that to do that the missionaries needed to have the Holy Spirit and that they needed to pray for the people. He declared to us that “No mission sets goals– it’s against the law. Individuals set goals.” And he encouraged us to set our individual goals high. This was a bit of a correction and a reprimand for my particular mission.

He also gave us a detailed account of how the presidency of the church had passed to President Howard W. Hunter when President Ezra Taft Benson had passed away earlier that year. He explained that the Lord chooses His prophet by taking the apostles away through death until the correct person is in the top place. He declared to us that he was a witness to the fact that the church is not lead by any man but is lead by the Lord.

After the conference he shook hands with all the missionaries. I still remember that his hands seemed so big. He had a tremendous smile, with enthusiasm and a spirit to match the size of his hands.

Years later, after I had returned home from the mission, married, and had children, I attended a stake priesthood leadership training meeting with Elder Perry in 2009, where he introduced us to the ward mission program changes for our stake. He seemed just as vibrant and energetic as he had years earlier. I remember being very impressed with how adept he was with technology. He explained how he used technology to enhance his scripture study, and pulled out his smartphone.

I’m thankful for these personal experiences with Elder Perry and his positive influence on the church and on the world. He was a true apostle of Jesus Christ.

Here is Elder Perry’s first General Conference address after having been called as an Apostle, given in April 1974:

Here is Elder Perry’s last General Conference address before passing away, given April 2015:

You can find every General Conference sermon given by Elder Perry here.