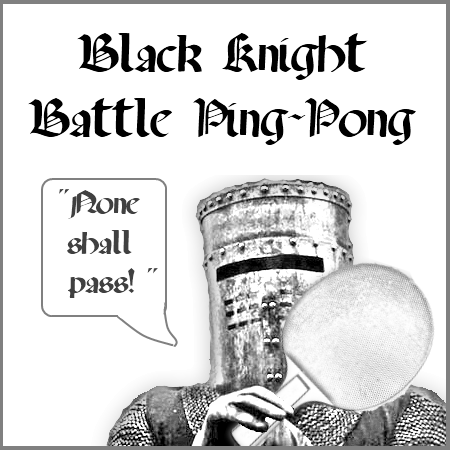 I really hadn’t played much ping-pong (table tennis) until last year when the company I work for purchased a ping-pong table for employees to use during breaks. When you sit at a desk for most of the day programming software, getting up and moving around periodically and using your mind in a different way can be a great way to prevent burnout.

Sometimes you stare at a problem for so long that you need to get away from it for a while and when you come back the solution just pops out at you. Ping-pong ends up being an excellent way to get your body moving and exercise different parts of your mind while getting to know some of your co-workers better. And the games are quite quick so you don’t take too much time before getting back to your job.

I can’t claim to be a great player, but I do enjoy it.

It’s named after the famous “Black Knight” scene from the movie Monty Python and the Holy Grail. You’ll soon understand why.

I tried the concept out with some co-workers and refined some of the original rules based on our experience. I think it is a lot of fun.

Here is how you play:

You can download a printable, single-page PDF document of these rules here: Black-Knight-Battle-Ping-Pong-1.0.pdf

The ball makes contact with a part of the body which stops or significantly changes the direction of the motion of the ball.

The ball makes contact with a part of the body but continues in mostly the same direction as it was going prior to contact.

A ball is toxic when it can damage a player. The ball is toxic to a player after it has been hit by his or her opponent’s paddle until it hits his or her own paddle or touches the floor. The ball does not have to land on the table to be toxic. Once the ball has touched the player’s paddle or the floor it is no longer toxic to that player even if it is still in motion.

The ball hits, not grazes, a player’s head, including the neck or face.

The ball hits, not grazes, a player’s torso including the groin or butt.

As with any game, the players are welcome to modify the rules as long as they both agree to the modification before the game begins.

If you have access to ping-pong equipment, give it a try and let me know what you think.